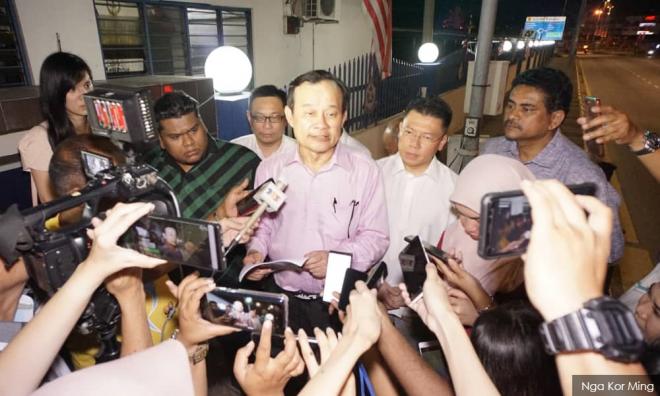 A day before Perak exco Paul Yong is set to face a rape charge, state assembly speaker Ngeh Koo Ham has lodged a police report on information he received regarding the case.

According to his report, Ngeh was at a boutique in Ipoh at 6pm today when he received information about an individual who purportedly accompanied Yong's accuser, an Indonesian domestic worker, to lodge her police report.

Ngeh said that according to the information he received, the individual allegedly received a cash payment of up to RM100,000.

He added that this individual was then threatened with a pistol so as to not reveal the secret.

Ngeh said in his report, which was made at the Pasir Putih police station, that he believed this information was relevant to the allegations against Yong.

Yong is expected to be charged at the Ipoh Sessions tomorrow court under Section 376 of the Penal Code for rape.

He has denied the allegation, and is currently out on police bail.

Earlier, Perak Menteri Besar Ahmad Faizal Azumu released a statement asking Yong to take a leave of absence while the trial is ongoing.

In a brief press conference outside the police station, Ngeh said that he lodged the report so that the information will be investigated.

"I suppose this information was not in the possession of the police when they were investigating," he added.

Ngeh called on the police to look into any possible hidden agenda behind the allegations against Yong.