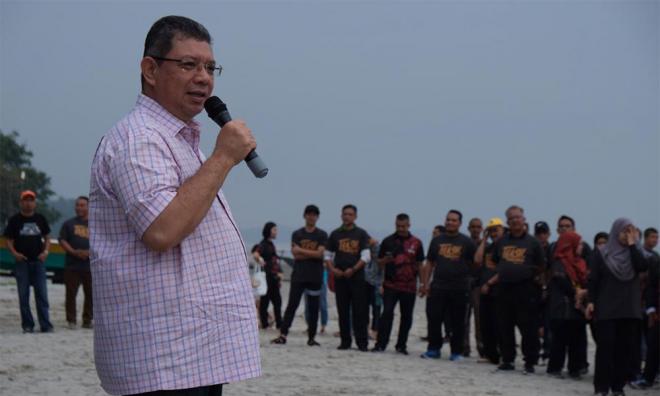 Resolving the traffic congestion at the Johor causeway, especially during the peak hours, is a priority for Malaysia and Singapore, said Foreign Minister Saifuddin Abdullah.

He said steps to resolve the problem was discussed by a Special Cabinet Committee chaired by Prime Minister Tun Dr Mahathir Mohamad recently, and that over RM70 million was allocated for the purpose.

The Home Ministry was selected to head the committee as the two key agencies at the border -the Royal Malaysian Customs Department (Customs) and the Immigration Department - come under it.

“Basically, the planned solution is to increase Immigration and Customs personnel and to improve the system that is being used, such as automated barriers because it takes times to check one-by-one.

“We also need to add lanes, and if we can afford, to use technology such as facial scanning. But it involves a high cost,” he told reporters after launching the “Trash Challenge” programme at Pantai Batu Hitam here today.

Singapore Prime Minister Lee Hsien Loong said at a joint press conference with Dr Mahathir in Putrajaya on April 9, the city-state was committed to help resolve the longstanding problem. Currently, about 250,000 to 300,000 people cross the causeway on a daily basis.

Commenting further, Saifuddin said the improvements at the Johor Causeway involve the construction of a sheltered walkway, because so far, the walkway has not been covered, making it difficult for users, especially during rain.

“This is a solution from Malaysia and we hope Singapore will also find a solution as well so that the congestion issue can be resolved," he said.

In another development, Saifuddin, who is also Indera Mahkota MP, said the Federal government has approved an allocation of RM2.5 million to upgrade Pantai Batu Hitam to lure more tourists.

The allocation would be used to improve the food stalls, toilets, pavilions and parking facilities, in addition, to a beachfront that would be the beach’s identity.