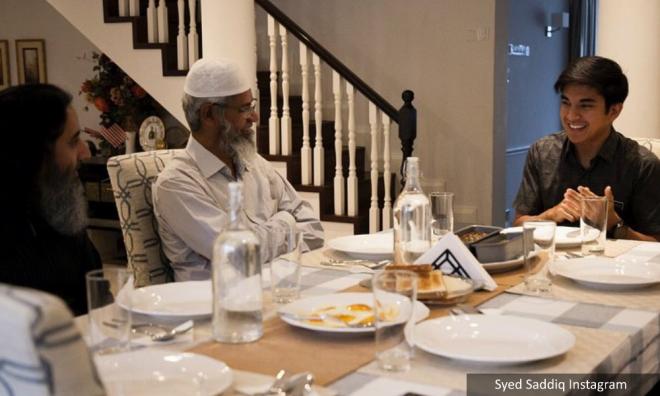 The two had dinner tonight at Saddiq's house in Petaling Jaya, just ten days after the minister called for Zakir to be deported over his remarks about Chinese Malaysians.

The deportation call earned brickbats for Saddiq from some Malay Muslim social media users and sources said he had been taking heat from supporters and Bersatu party members too.

In his Instagram post tonight, Saddiq, who is also Bersatu Youth chief, said it was time to move on.

"No one in this world is free from making mistakes. Zakir has apologised. I myself have made many mistakes and am open-hearted when I am reprimanded.

Zakir had on Aug 8, in a speech in Kelantan, made remarks that were deemed to have questioned the loyalty of Indian Malaysians to the country.

He also referred to Chinese Malaysians as "old guests" and said those who wanted him out should ask these "old guests" to leave first.

The India-born preacher has claimed that his remarks were taken out of context and has since apologised.

Prior to Zakir's apology, Saddiq had supported a call for the preacher to be deported, saying that "an attack against our Chinese and Indian brothers and sisters is an attack against all Malaysians."

In his post tonight, he stressed that national unity was a strength and that each race had made its own contributions to the country.

"Malaysia is a country that is racially and religiously diverse. We believe in moderation over extremism.

"Unity in diversity. Stronger, together, forever," he said.