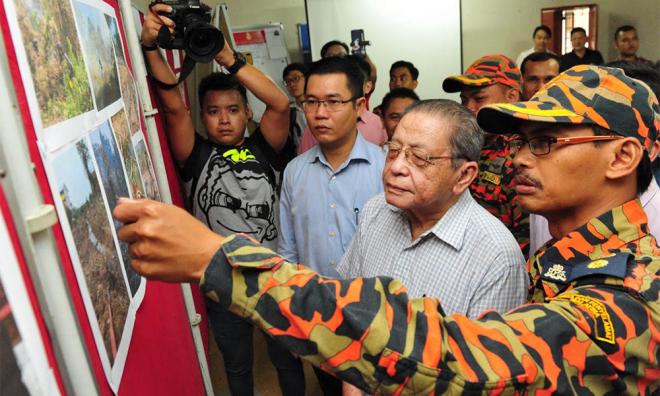 DAP supremo Lim Kit Siang has proposed a joint government conference between Putrajaya and Johor following a series of environmental disasters in the southern state.

"The time has clearly come for the environment in Johor to be given top priority," he said in a statement today.

Lim made the proposal to Johor exco Tan Chen Choon, who is in charge of the local government, urban wellbeing and environment portfolio after visiting the site of a week-long bush fire in Kampung Pekajang that led to the temporary closure of two schools.

I commend the Fire and Rescue Department officers and personnel for their dedication in fighting the bush fire for the past week," he said.

He noted that the bush fire was the third environmental incident in just a few months.

The Iskandar Puteri MP said it began with the release of toxic fumes on March 7 after chemical waste was illegally dumped into Sungai Kim Kim, affecting some 6,000 people with 2,775 hospitalisations and 110 schools closed.

This was followed with increased concentration of toxic fumes in the Pasir Gudang area in June due to the densely populated factories near residential areas which again saw many school children being sent to the hospital for treatment.

Advertisement
01
Race for Sabah CM candidate as GRS risks coup with every passing moment
26 Sep 2020
02
Sabah voters are kind to defectors
27 Sep 2020
03
CM must be from Umno, says Zahid after election win
26 Sep 2020
04
Shafie makes no mention of conceding defeat, says Warisan has most seats
26 Sep 2020