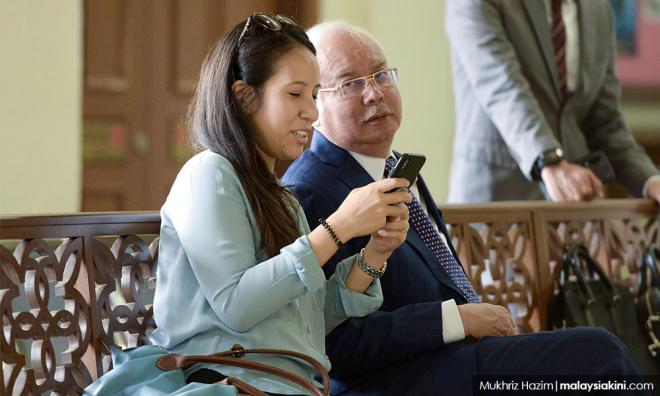 YOURSAY | ‘The apple does not fall far from the tree. Notice the arrogance in Nooryana Najwa's response?’

Why tax me when I only received money from wealthy husband? - Nooryana Najwa

Frankie: Yes, Nooryana Najwa Najib, save your thoughts for your argument in court. If your income is not taxable in Malaysia, then well and fine.

Now coming to the case of your father (that he received a massive donation from a generous Arab), it's a whole different story. Let's see how well he can defend himself in court.

Anonymous_b26b32c7: RM10.3 million in taxes? Can you imagine what was the principal amount?

With this much money, you can pay a little to help the government to fund welfare schemes.

Monty: Nooryana, did anyone tell you that even donations and presents need to be declared to the tax office? No?

Of course, your father would also not have told you, because he himself did not declare the billions of ringgit that fell into his lap.

Jaycee: The apple does not fall far from the tree. Notice the arrogance in her response?

This family has no shame. Let us not forget how her mother-in-law (Maira Nazarbayeva) allegedly tried to stiff seven Hermes bags worth RM1.72 million at a shop in New York City a few years ago. In addition, she, Maira, threatened the shop owner.

This goes to show that the family members from her in-law side are just as dodgy as hers. And now we are made to believe that she married into wealth!

CQ MUARku: It so happened and fated that the government was changed. If your father had held on to power as prime minister like he did prior to GE14, others would suffer the same fate as you are now.

You should know how mercenary your father was as prime minister of this country, apart from all those criminal charges he is now facing.

Just too bad, Nooryana, that you're now on the receiving end instead. Fate is sometimes cruel. Well, just remember, what goes around comes around.

Roger 5201: Prime Minister Dr Mahathir Mohamad said he had personally witnessed the lavishness of Najib Abdul Razak's family when he attended Nooryana's engagement ceremony with Daniyar Kessikbayev in 2011, when he was still on good terms with them.

"I went for the engagement ceremony, I was shocked. There were 16 barrels which were carried by two soldiers. There were all kinds of things in them – watches, shoes, clothes, cloth – which passed by me. Where do they get the money to buy such things," he said.

Chrysḗ Chersónēsos: "Taking to social media, Nooryana Najwa Najib questioned the Inland Revenue Board's (IRB) move to tax her over money given by her wealthy husband Daniyar Kessikbayev and his family."

You mean money from this man, right?

Rzee: Nooryana, tell your tall tales to the court. Just like your mother and father and brother are doing.

We don't need to hear your defence by way of social media. When the trial starts, the judge will tell you off for discussing your case in the media to get public "support".

Honma: She just made a wild accusation that the Inland Revenue Board took instructions from politicians to charge her for non-payment of tax.

Probably the former regime under his father might have done so, but not this New Malaysia government.

IRB, which is now a professional body, will base its case on evidence from the tax declaration forms. Why complain? Just show all your records as proof.

Newday: This is a really nonsensical question: Who was in charge of the country at that time? Her father.

What did her father do to IRB in that time? He turned it into a weapon of harassment for the benefit of BN, and he didn't pay taxes as most of his cronies didn't, due to his overarching influence.

IRB staff were in fear of reprisals if they did not go along with Najib's political interferences. Indeed, the IRB is finally free of the shackles.

Nooryana, how much of that fabulous amount of money coming into your local bank accounts here was actually declared as being from a foreign source?

It is still income no matter where it came from or for what purpose it is intended. You have received income in Malaysia.

Are you another in a long line of the fabulously wealthy here who have never had a tax file number and never paid income tax?

Your family are experts at avoiding paying their tax dues, as opposed to the rest of us mere wage and salary earners who do so every year.

Shibboleth: All income, by whatever name, received by you is taxable income under the Income Tax Act 1967.

If your argument is sustainable, that is, they were dowry, household expenses or gifts from your loving husband, then all taxpayers, too, can claim the same.

For example, I work in Gamuda – can the IRB consider my "household expenses" of RM10,000 a month as tax-free?

For a 30-year-old woman, who claims to have worked for a while, it is incorrigible that she has not filed her tax return from 2011 to 2017.

Maybe she thinks like the other Umno warlords, and being the daughter of the Umno president, she is automatically exempted.

Starwars: Dear Nooryana, since the Pakatan Harapan-led government asked us to move on with the Muslim preacher Zakir Naik case, I have nothing bad to say about your case.

Let’s move on. If a foreigner like Zakir Naik can get better treatment in this country, you deserve to be treated better.