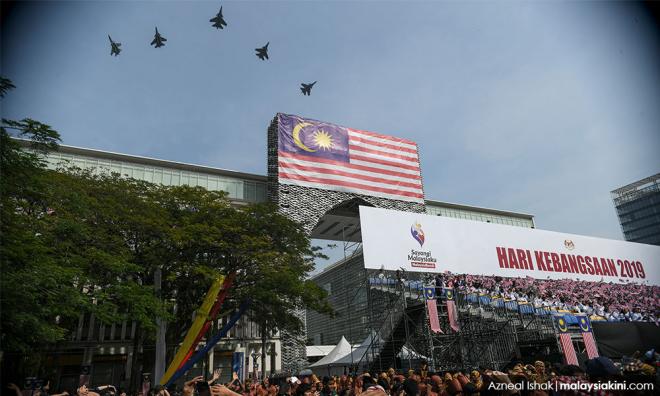 Be a transparent, accountable and clean government

ADUN SPEAKS | As Pakatan Harapan celebrates the second National Day since it took over Putrajaya, it faces continuous backlash from conservatives, as well as the bureaucracy that is largely uncooperative.

Various forms of fake news are constantly propagated in our society and the government is deeply entrapped in racial and religious extremism.

As a result, the government’s reform agenda has been hijacked by extremist views, making efforts to reform institutions and establish political accountability an arduous journey.

The Harapan government is right to focus on improving the economy in order to be free from the chains of racial and religious extremism.

At the same time, the government must also keep implementing substantial reforms in order to ensure that our political reforms are moving in the right direction.

All in all, the crux of all problems facing our country is none other than the structurally corrupt and ossified institutions. The change of government offered us an opportunity to reset, yet the journey of democratic reforms remains long and arduous.

In April this year, an incinerator in Cameron Highlands that has yet to be approved had caused air pollution in the surroundings during its test run.

I wrote many times to request the Environment Department to closely monitor the situation, observe its test run and conduct an environmental impact report.

Once when I shared the reply letter from the DOE with a local environmental NGO, I received a reminder from an officer that this document was considered an official secret and therefore, should not be circulated.

It puzzled me as to why government agencies are listing reports that are related to public interests, health and the environment as official secrets?

Why can’t the government agencies take initiatives to disclose such information in order to stop confusing the rakyat? If such information can only be read by a small number of people and is not allowed to be made public, how can we protect our citizens’ right to know?

Speaking of information related to the environment, one must not forget to mention the Convention on Access to Information, Public Participation in Decision-making and Access to Justice in Environmental Matters (Aarhus Convention).

The Aarhus Convention is one of the most iconic and groundbreaking international conventions that is based upon three main pillars that protect citizens’ rights, namely public participation in environmental decision-making, access to justice by guaranteeing the right to appeal to courts, as well as access to information related to environmental issues from the authorities.

These three main pillars aim at ensuring that the general public has the right to know about environmental issues and to participate in the governance of their country.

Last year, when I was requesting information on earthquake magnitude in Malaysia, the process was extremely tedious. I even had to seek assistance from the political secretary to the energy, science, technology, environment and climate change minister to obtain the information.

When even a state assemblyperson has to go through a tedious journey just to obtain a piece of information relevant to public interest, it is not difficult to imagine that ordinary citizens generally lack confidence in the government and its governance.

In order to rebuild citizen’s trust in the government, efforts to ensure transparent governance and openness of government information should not be delayed in order to build a corrupt-free government.

In July, Prime Minister Dr Mahathir Mohamad (photo) said that the government intends to draft the Freedom of Information Act as a replacement for the archaic Official Secrets Act 1972, and is expected to table the bill in Parliament in the middle of 2020.

In view of this, it is my sincere hope that the future directions undertaken by the government will, including the FOI Act that is being drafted, cover the following three main aspects:

The general public should be able to obtain immediate, accurate and easily assimilated information.

Based on the Code of Good Practices on Fiscal Transparency set by the International Monetary Fund, the financial transparency of a government includes four main pillars, namely clarity of roles and responsibilities, open budget processes, public availability of information, as well as assurances of integrity.

Integrity, transparency and accountability are the most important foundations of democracy.

These three elements, that are mutually dependent on each other, are the key indicators to the good governance of a modern nation.

Therefore, we must ensure that the public can freely access reliable information during the processes of making decisions and executing instructions by the government agencies.

This will help ensure that the four important values, namely transparency, accountability, participation and efficiency, are upheld by the administration in order to reduce corruption to the lowest level.

Also, even for the most marginalised community, they can express their views and participate in the decision-making processes.

When the public is unable to obtain adequate information, a sense of distrust of government institutions will gradually be built up.

Therefore, the government’s purpose to make information publicly available is to make it convenient for the public to share and utilise government information, as well as to protect citizens’ right to know.

Such an effort will improve the awareness, trust and ability to monitor public affairs, all of which help improve public participation and civic awareness.

When information related to policy is open and transparent, the general public will be clear about the processes of policy discussion and decision-making.

When the public has the space to participate in the above-mentioned processes, various forms of misunderstanding, bias, resentment and discontent regarding policies will be greatly reduced.

My wish for National Day is that the consensus and trust between the government and the rakyat can be gradually established.

Just like friendships can be maintained because of mutual trust, mutual trust should also be established between the government and the public so that our beloved nation can be well-governed and prosperous.

CHIONG YOKE KONG is the state assemblyperson for Tanah Rata.