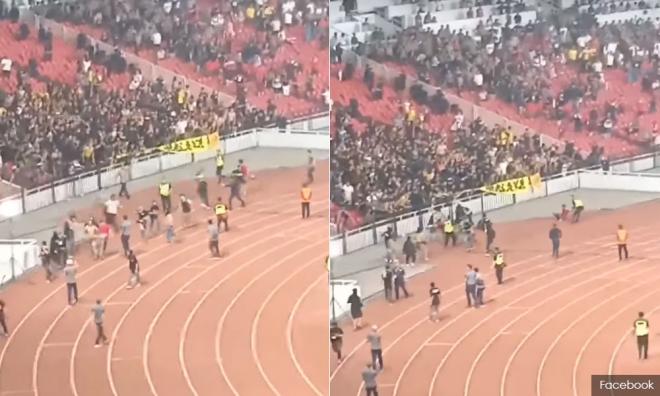 Three Malaysians were injured in the chaos that marred Harimau Malaya's victory against Indonesia's national team in the World Cup 2022 qualifier at Gelora Bung Karno Stadium in Jakarta last night.

CNN Indonesia quoted a Harimau Malaya supporter, Shah Fezan, as saying that his friend was injured during an initial incident that forced the match to be stopped shortly after the second half had started.

Unruly Indonesian fans had thrown missiles on the pitch, as well as bottles and other objects towards Malaysian supporters at the stadium.

"There were three who were injured. One of them slipped and fell during the chaos at the stadium.

"His arm broke, he was evacuated and taken to the hospital," said Shah Fezan.

The hooligan act continued outside the stadium after the match was over and hundreds of Malaysian fans, along with Youth and Sports Minister Syed Saddiq Syed Abdul Rahman, were left trapped inside for about two hours.

This was as Indonesian authorities were forced to fire teargas to break up the unruly fans.

Indonesia's Detik.com reported that the Republic's Youth and Sports Minister Imam Nahrawi is expected to meet with Syed Saddiq this morning over the incident.

According to Bernama, all 24 national players and Malaysian officers left the stadium in five Barracuda armoured vehicles under heavy escort by Indonesian authorities.

Malaysia is set to face the United Arab Emirates team at the Bukit Jalil National Stadium on Tuesday.