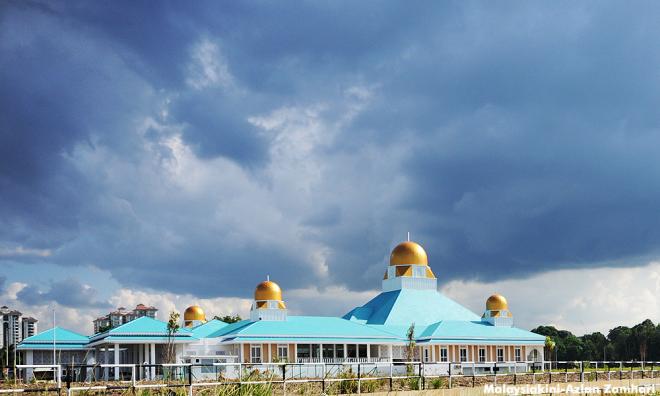 Report: Interfaith prayers not an issue in Sarawak

The Department of Islamic Development Malaysia (Jakim)'s view that Muslims in Malaysia are not allowed to participate in interfaith prayers is not an issue in Sarawak, said a state junior minister.

Online portal The Malaysian Insight quoted Sarawak Islamic Affairs Junior Minister Abdul Rahman Junaidi as saying that praying together has been a part of religious tolerance as practised in the state.

"In Sarawak, this is not an issue," said Abdul Rahman.

Abdul Rahman was responding to Jakim's statement made based on outcomes of a 2006 national-level fatwa council meeting, as well as the 113th Federal Territories Shariah Law Consultative Council meeting, which concluded that Muslims are not allowed to participate interfaith prayers - whether in the form mass silent prayers or through separate rituals at an event.

Commenting further, Abdul Rahman said recitation of a Muslim prayer at state government functions will continue, even in presence of non-Muslims.

The Pantai Damai assemblyperson added this is more so as all prayers are intended to seek universal good.

"We in Sarawak always prioritise maintaining harmony and unity among races and religion in a multi-cultural society," he said.

Abdullah reportedly said Sarawak could not afford to abide by a decision to bar Muslims from participating in joint prayers with non-Muslims.

"In all state government functions, we will say a prayer and believers of other faiths are also encouraged to pray in their own way.

"[For] the Ustaz reciting the prayer, I have never heard them say the prayer is only for Muslims," he said.

Abdullah added that Gabungan Parti Sarawak practises more inclusive values and it will not play politics with the rakyat's trust.

"This is our identity, inclusive, not exclusive. In Sarawak, there is no room for such things (exclusivity).

"We do not want to get dragged into the political culture of the Peninsula, controlled by political parties there," he said.

Jakim's arguments supporting its decision to not allow Muslims to be involved in interfaith prayers was explained in an Aug 7 letter in response to a query from the Department of National Unity and Integration (Perpaduan) on organising unity events.

Yesterday, it was reported that Perpaduan had issued a directive on Tuesday that joint prayers at unity events involving both Muslims and non-Muslims have been barred.

The directive which quoted Jakim's advice saying that any elements of joint prayers should be replaced with activities that shared the message of unity.

Jakim's statement did not explicitly state Muslims were prohibited (dilarang) from participating in interfaith prayers.

Instead, the statement said the 113th Federal Territories Shariah Law Consultative Council meeting decided that Muslims "should not be made to" (tidak mengharuskan) involve themselves in interfaith prayers.

However, Malaysiakini is made to understand that in Islamic jurisprudence, "tidak mengharuskan" could be taken to mean "not permitted".

Jakim also stated that there were no restrictions on non-Muslims to organise or be involved in such events.