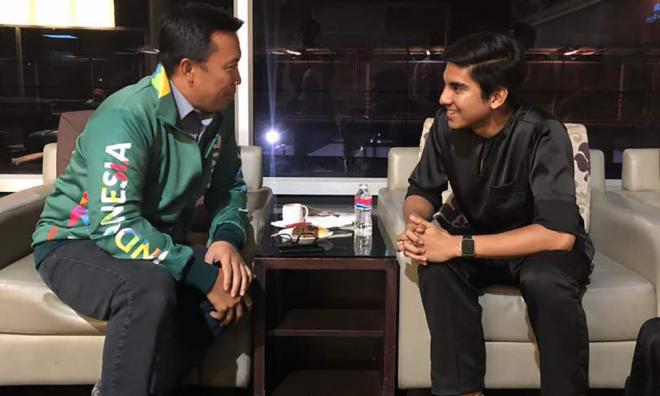 "I would like to apologise on behalf of the people of Indonesia and the government to minister Syed Saddiq for the behaviour of some supporters.

"The Indonesia-Malaysia friendship should not be ruined due to football rivalry and we will continue to monitor the situation.

"The police must act against the supporters who committed the damage (at the match)," said Imam (on left in picture above), according to a report by CNN Indonesia.

In yesterday's incident, Indonesian supporters created chaos shortly after the second half of the match began and again at the end of the match, which was won 3-2 by Malaysia.

Hundreds of Malaysian supporters, including Syed Saddiq were trapped inside the stadium for about two hours as police had to resort to firing tear gas to clear the attackers.

All 24 players in the squad were forced to board about five Barracuda armoured vehicles to their hotel.

Meanwhile, Syed Saddiq handed over a formal report on the riot to Indonesian authorities.

"We appreciate the firm stand taken by the Indonesian government. I also received a (personal) explanation from Imam.

"We are still close friends and we make sure that our hospitality is maintained. Although firm action will be taken against those who committed these acts, we need to work together to resolve this issue together," Saddiq is reported as saying.