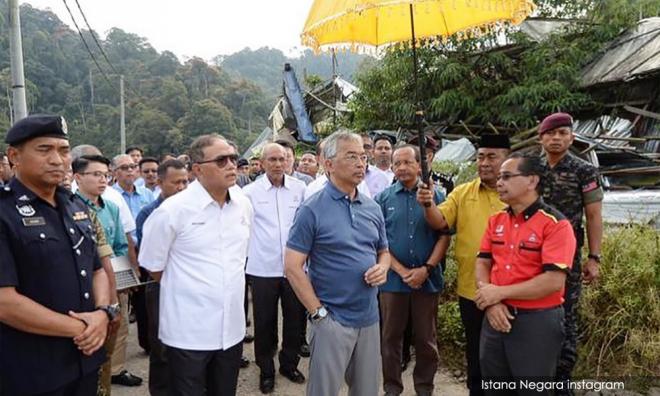 The king arrived at 11am, much to the delight of the Orang Asli residents who had been eagerly waiting, since the break of day, for the arrival of the ruler and to most of them, an opportunity to meet His Majesty in person.

The visit to the Orang Asli village is part of the itinerary in Sultan Abdullah’s maiden visit to the Cameron Highlands after being officially installed as the country’s 16th Yang di-Pertuan Agong.

In a casual speech, but filled with advice, the king expressed hope that the government would improve ways of helping the Orang Asli community and the poor so that they could improve their lives in the long run.

“From my observation, before, there is the Felda concept that gives huge benefit and helps the poor. I hope this concept can be improved and expanded for the Orang Asli, as well as the poor, to provide long-term resources for their children and grandchildren.

“I hope this can be considered and discussed because I want all the rakyat to be protected and given the opportunity to increase their income and wealth," said Sultan Abdullah.

Meanwhile, the king reminded residents of Sungai Ruil, who had moved to their new and modern home to maintain good hygiene and cleanliness of their surroundings to prevent an outbreak of any disease, especially involving children.

“How are your houses? Good? All of you, maintain the houses well, they are concrete houses, so don’t extend them with wooden structures,” added His Majesty.

The Sungai Ruil Orang Asli resettlement project has 152 houses which were built following a landslide on Aug 7, 2011.

Sultan Abdullah decreed for the people of various races and religions to put aside their political differences and to resolve their problems amicably to ensure a united, peaceful and harmonious life.

Later, when approached by Bernama, His Majesty said the Orang Asli community had always been close to his heart.

“Before, they used to go to the palace, they brought honey. Now, not many (went to the palace). Those who used to go maybe old now, and many have moved to modern (developed) areas.

“As the heir, I will certainly accept responsibility (to care for the Orang Asli). That is why, if there is any misunderstanding, resolve the problems so that they will not prolong,” the Agong added.

During the visit, Sultan Abdullah also handed over contributions to the villagers.