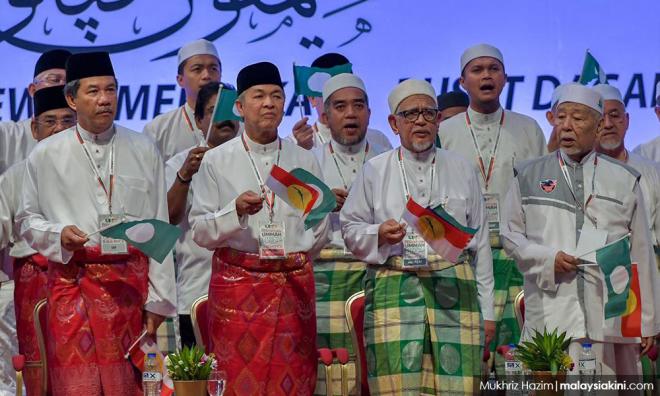 PAS president Abdul Hadi Awang today impressed on PAS and Umno supporters on the common ground of both parties since before independence in explaining the new marriage between them.

He said that the four decades-long rivalry between Umno and PAS, sometimes even entering the realm of hostility, was a misunderstanding.

"The clash (between Umno and PAS) is only due to the difference in approach and misunderstandings in secondary issues that are technical in nature.

"In facing a bigger challenge, it is necessary for us to be united on policy and basic issues as well as to compromise on our differences and to forgive...," he told the crowd at the Himpunan Penyatuan Ummah (Muslim Unity Gathering) at Putra World Trade Centre where both parties inked a charter of political cooperation.

PAS joined the Alliance (BN's predecessor) led by Umno in 1972 but quit the coalition in 1977 amid increasing political friction between the two parties.

It continued to perform poorly in the next 20 years, failing to win more than seven parliamentary seats until a resurgence in 1999.

Despite the bitter rivalry, Hadi said Umno and PAS have always had common ground.

"Why is PAS standing with Umno today in the beginning of a new approach?

"It is because both parties, among the earliest which fought for independence, although different, have many common points.

"These common points succeeded in laying the crucial foundations of the Federal Constitution which are: the position of Islam, the rights of other religions, bumiputera rights, Bahasa Malaysia, the rights of a diverse society and others," he said.

In the early days of its formation in 1951, PAS was intended as a platform for Muslim clerics in Umno but the two entities eventually diverged.

Hadi also emphasised the dominant group in government must be Muslims and spoke out against the concept of "Malaysian Malaysia", which is espoused by the DAP.

"Islam must be practised by the race that dominates the national leadership.

"We are only continuing what was started by the first leaders who achieved independence and succeeded in laying the foundation of Malaysia in the Federal Constitution," he told more than 2,000 Umno and PAS delegates with more than 5,000 more supporters crowding outside the hall.

Umno and PAS initiated closer political cooperation following the former's defeat in the 2018 general election, culminating in the formalisation of ties today.

Coincidentally, PAS had entered the 2018 general election alone, having had a falling out with its former allies in Pakatan Harapan which it had cooperated with under Harapan's predecessor Pakatan Rakyat.

Harapan, together with its ally Warisan in Sabah, pulled off a surprise win in the May 9 general election, ending Umno's more than six decades long of interrupted hold on power.