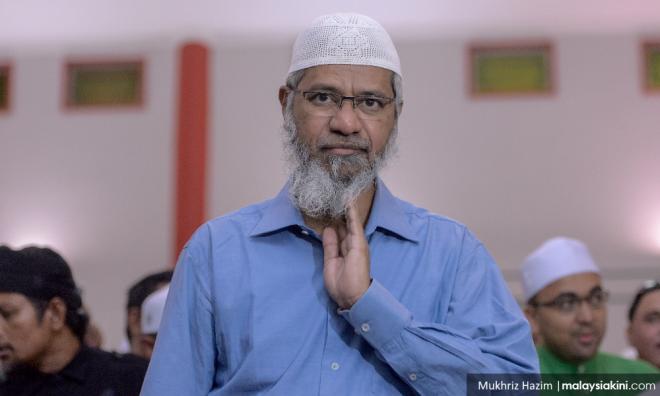 Indian authorities are reportedly planning to use the Fugitive Economic Offenders Act (FEOA) against controversial preacher Dr Zakir Naik, who is wanted in his home country over money laundering charges.

News service IANS reported that a highly-placed source within India’s Enforcement Directorate (ED) said the agency is “mulling the idea to invoke FEOA against Zakir (photo) in the money laundering case being probed by us”, as reported by Free Malaysia Today.

The FEOA grants authorities the power to take criminal action against someone against whom an arrest warrant has been issued but has left India to avoid prosecution or is abroad and refuses to return.

A “fugitive economic offender” under the FEOA will allow the ED to confiscate all his assets.

If Zakir was declared a fugitive economic offender, it was reported that this development will also help probe agencies in Zakir’s extradition from Malaysia.

Zakir was formally charged in absentia in a Mumbai court for money laundering in May this year. He was accused of acquiring about Rs1.9 billion (RM114.5 million) worth of criminal assets.

The Indian-born preacher took refuge in Malaysia in 2016 and was given permanent resident status in Malaysia.

He has since refused to return to India, claiming he would not get a fair trial.

Zakir recently made inflammatory comments asking ethnic Chinese in Malaysia to “go back” and questioned the loyalty of Indian Malaysians.

He has since been banned from speaking publicly in Malaysia.