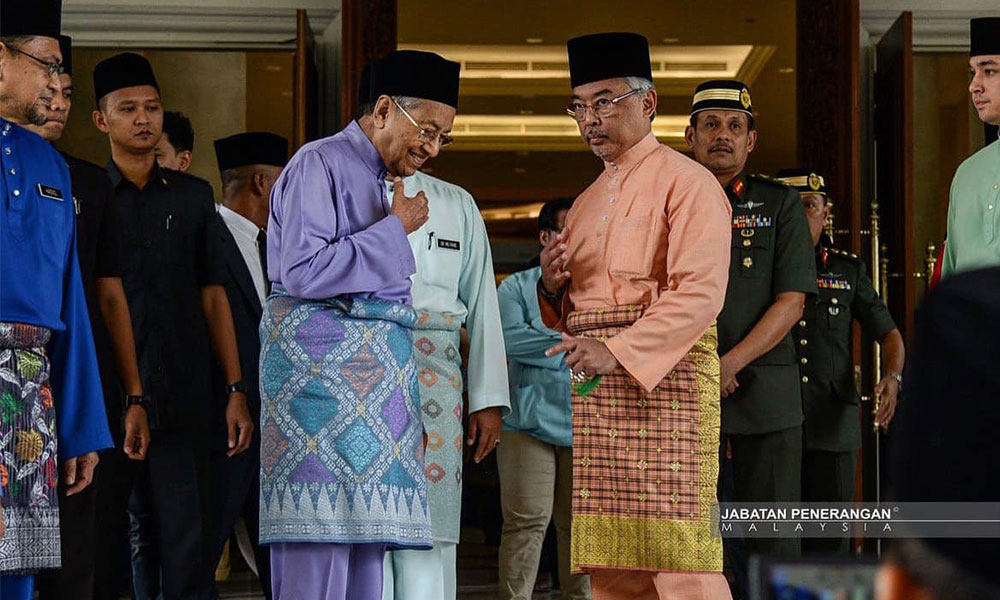 Yoursay: Those who rule should stop the division

YOURSAY | ‘Mahathir, the gov't's lack of action belies your words.’

Dr M on M'sia Day: There are those who want to divide us, don't allow it

Voteforchangejohor: Prime Minister Dr Mahathir Mohamad, many citizens share your thoughts and agree that uniting the multiracial and multireligious population of Malaysia is one of the top and most important agenda for the country.

The citizens wish you will do more in promoting unity rather than supporting controversial issues that are separating the various races now.

Many citizens are ready to reject the narrow narrative of racism and religious extremism put forward by the Umno-PAS alliance.

Besides being vague in their announcement of the alliance, the details of the alliance are not known. It is doubtful that this alliance is forged for the interests of the citizens of Malaysia.

Frankie: Don't just ask us to ignore those who divide us. You, being the topmost leader of the country, should reprimand those who spew hatred, counter their narrow narratives head-on, or throw the book at them.

Politicians dividing the rakyat for their personal gain will not stop unless you and the law stop them in their tracks.

Start with those selfish politicians who are in your cabinet and your party.

Anonymous_1540780680: Don't always push the responsibility to the rakyat, asking them to defend unity.

The government and the authorities have the responsibility to take action on those trying to divide us.

There might be differences among the ruling parties, but the authorities, especially the police, regardless of their ethnic, religious or political views, should get their job done based on the law.

They are working for the rakyat, not for the government or certain political parties.

Shanmugam V K Subrayan: You were the root cause of this racial and religious division during your first 22-year rule. You have done nothing concrete since May 2018 to undo the mess you created.

You harbour a foreign fugitive who is known for his hate speeches. With your patronage, he dares to make police reports against our elected representatives.

As usual, our PDRM (Royal Malaysian Police) jumps into action to investigate the representatives speaking out against him. Yet you go around making speeches to please the audience. What a shame!

Conscious: Mahathir, you speak what we like to hear, but your actions speak otherwise.

You condone a foreigner who is wanted for money laundering, who has induced venom. He sits in our family house and you are not doing anything? How do you want us to think of you and what you preach?

Get this man out of our family home, please. We want all our family members to live happily and support your leadership.

Fair Play: Same old, same old. Same rhetoric when he was the fourth PM. Now, he is at it again.

But hopefully, not for long because, by June 2020, his two years as PM is up.

Gotcha: Yes, just deport Zakir and people will support Pakatan Harapan. We don't want a troublemaker who has no respect for other great religions of the world in our country.

Existential Turd: In Malaysia, those who insult other races, cause strife and disharmony, are not considered the culprits of disunity. Neither are the puppeteers behind these aggressors.

It is those stupid enough to point out the obvious, who demand equal treatment, who are blamed for causing disunity. Asking for equality is considered a great insult to the Malays.

Mano: Successive ministers of education have messed up the system. That is the cause of disunity.

Many Chinese and Indian parents used to send their children to schools which catered for all races. These schools were looked up to. Now the national schools are run by "dumb and dumber" teachers.

Even some Malay parents do not want to send their children to these schools. They either go to Chinese schools, or those who can afford it, private and international schools.

Anonymous_3f4b: Indeed, there is no credibility in his speech.

Prudent: So long as he doesn't get rid of Zakir Naik and stop his race and religion shenanigans, Mahathir is speaking balderdash.

Anyway, it’s too late for that. Harapan must summon the courage and wisdom to get Mahathir to step aside.

Hand over to PKR leader Anwar Ibrahim and retire. Enough is enough.

This has started to gain traction within his party, and even former finance minister Daim Zainuddin has supported it.

Mahathir only knows how to play an old record.

Notanonymous: Divide and rule. They tell the Malays, the DAP is in charge, and then tell the non-Malays that most of the Malays are racist.

People still fall for it. Why? Because of years of indoctrination.

yoursay
mahathir mohamad
race & religion
pakatan harapan
Related Reports
'Buy Muslim Products' campaign not wrong, says minister
a year ago
Yoursay: Dr M uses wrong analogy in his defence of Zakir Naik
a year ago
What is so special about fugitive Naik?
a year ago
Umno-PAS alliance: Challenges in the immediate term
a year ago