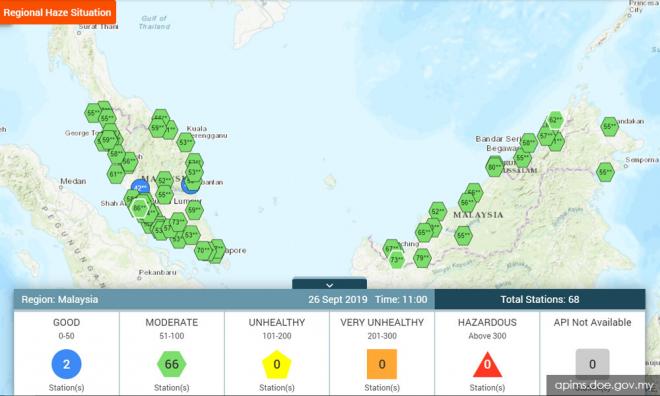 Clear skies look to be on the horizon today as haze conditions improve with no "unhealthy" readings recorded this morning.

According to the Environment Department’s Air Pollution Index (API), majority areas recorded 'moderate' readings as at 7am.

Better still, Tanjung Malim in Perak and Besut in Terengganu even recorded "good" air quality with readings of 48 and 49, respectively, at 7am today.

As at 11am, air quality continued to improve with Tanjung Malim recording API of 42 and Indera Mahkota Kuantan in Pahang recording an API of 41. Besut’s API, however, went up slightly to a moderate level of 51.

Schools are to close when API exceeds 200, while an emergency is declared when the reading exceeds 500.

Meanwhile, Indonesia, believed to be the main source of the transboundary haze due to forest fires there, is still affected.

CNA reported slightly improved conditions yesterday as the number of hotspots there dropped by more than 40 percent after rain in Sumatra and Kalimantan.

Up to 47 Malaysian students returned home yesterday after being evacuated from Riau and Jambi, in Indonesia, due to the haze.