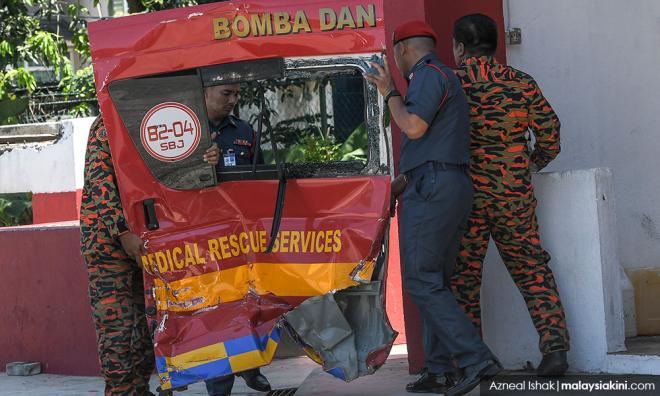 This occurred when assailants dragged him out of the vehicle and at the same time kicked the door which slammed against him repeatedly.

Coroner Rofiah Mohamad, who attributed the firefighter's death to a criminal act perpetrated by two or three unidentified assailants, had listed a brief of the court's findings during the 41 days of proceedings, which heard the testimonies of 30 witnesses.

Among the findings Rofiah read in court were videos taken during the Nov 26, 2018 incident, including a 46-second clip.

She said a still image from the video showed Adib was still inside the Emergency Medical Rescue Services (EMRS) van with his head facing the rear while holding the front passenger's door which was slightly ajar.

"It was logical that from the victim's body language, he was looking to ensure the EMRS van would not hit anything or anyone when it was reversing," she added.

"If the victim had disembarked the vehicle by himself, he would have fallen backwards and if this was what happened, the victim would have sustained crush injuries as he would have been run over by the van and even the fire truck (which was in front of the van and also reversed to avoid an advancing mob) and would have died instantly," she noted.

Besides this, Rofiah said the court accepted National Heart Institute (IJN) medical assistant Ashraf Baruji's testimony that Adib had told him that he was assaulted.

She said the court deliberated that Adib told this to Ashraf due to the personal bond established between the two during the period the firefighter was treated at IJN.

This bond, Rofiah added, could explain the reason Adib told Ashraf about what happened to him instead to a police investigator, to whom the victim had only shaken his head when asked about the incident.

Meanwhile, the coroner also said based on testimonies and evidence presented by witnesses, including S Suresh, who saw a group of men appearing to be beating and kicking a person, the court had established that some 20 to 30 people had assaulted the victim.

However, the court believes that this beating which happened outside the EMRS van did not result in Adib's fatal injuries, which were sustained earlier.

Rofiah said Adib would have already been unconscious by the time he was set upon by the large mob.

Met after the verdict was delivered, lawyer Kamaruzzaman Wahab, who represents Adib's family, told reporters they want the police and attorney-general to apprehend and charge those responsible for the firefighter's death.

"This inquest is not the end. This is only the beginning, where the court ruled that the Adib's death was because he was attacked,” he added.