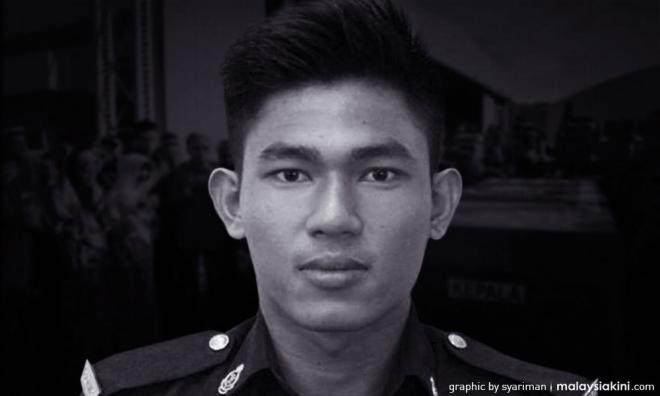 Court: Adib's death due to criminal act by unidentified assailants

LIVE | The Coroner's Court in Shah Alam, which conducted an inquest into the death of firefighter Muhammad Adib Mohd Kassim, will deliver its findings today.

Muslim NGO Ummah is organising a peaceful gathering at the court complex, and politicians from PAS are expected to also be present.

Malaysiakini reports from the scene, live.

Thank you for following our live report today.

He says that his parents in Kedah have been informed of the decision.

"For now, we will not be pursuing any civil suits. Even if we did, who do we sue?," he said adding that his parents Mohd Kassim Abdul Hamid, 63, and Asma Aziz, 51 will arrive in Kuala Lumpur tonight.

Separately, their family lawyer Syazlin Mansor expresses relief and thankfulness over the verdict.

She also thanks the inquest expert witnesses, including UKM forensic pathology professor Dr Shahrom Abd Wahid, who had testified that Adib's injuries were inconsistent with an accident.

The small crowd outside the court complex disperses shortly after.

He shakes hands and hugs several colleagues who calm him down.

Syed Shahril Anuar (above, right) was the 18th witness in the inquest proceeding.

He had at the time testified about his moments with Adib while the firefighter was being treated at the National Heart Institute.

When approached by Malaysiakini today, he declines further comments.

Others who separately address the media include Gerakan Pembela Ummah chief Aminuddin Yahya.

10.35am - Jalan Persiaran Pegawai: Umno Supreme Council member Lokman Noor Adam leads a rowdy crowd in chants of "Undur Zuraida" just as the Housing and Local Government Minister is addressing reporters on the outcome of the inquest.

10.30am - Coroner's Court: The mood inside the courtroom is a mixture of joy and sombre as Coroner Rofiah Mohamad delivers her verdict that firefighter Muhammad Adib Mohd Kassim's death was a result of criminal act.

Someone from the court's public gallery was also heard saying "Yes! Alhamdulillah" as soon as the court's finding is announced.

Several others, including lawyers representing the victim's family, were also seen hugging each other.

10.25am - Coroner's Court: Coroner Rofiah Mohamad says the court now leaves it to the Attorney-General and police to carry out investigations and to press charges.

10.20am - Jalan Persiaran Pegawai: PAS' Pasir Mas MP Fadhli Shaari (below) reiterates the call for Attorney-General Tommy Thomas' sacking following the inquest verdict that Adib's death was a result of a criminal act.

He also calls for criminal charges to be brought against the individuals allegedly responsible for Adib's death.

Adib's older brother and fiancee are expected to address reporters in a short while.

10.12am - Coroner's Court: The Shah Alam Coroner's Court rules that firefighter Muhammad Adib Mohd Kassim's death was the result of a criminal act, and also the failure of police to act at the time of the incident.

In delivering her judgement, Coroner Rofiah Mohamad says that the court concluded that the blunt chest trauma sustained by Adib during the incident was not self-inflicted or an accident, but was caused by two to three unidentified persons who pulled the victim out of the fire department EMRS van, hitting him and dragging him.

"I also found that the victim's death was the result of the police's and FRU's failure to control the riot.

"Evidence clearly showed that there had been several fire incidents (during the riot) before the victim was involved.

"Firefighters had also been threatened by rioters who didn’t want the flames to be put off, but there were police officers on guard and the fires were successfully put out by the firefighters.

"It was very unfortunate when two troops of FRU with hundreds of personnel and seven various types of vehicles, including water cannon, only watched the rioters attack the firefighters without doing anything.

"They were only standing by with their weapons because they didn't receive any orders to act, despite the tense situation."

9.55am - Jalan Persiaran Pegawai: The Fire and Rescue Services Department union members are present to hear the inquest's verdict today.

Its president Zainal Abidin Nong Chik says they hope the verdict will bring justice to Adib.

"We are not here to rally, but we come in support of the late Adib and to represent all firefighters in Malaysia.

"I hope the verdict will be in our favour. I also hope Adib's family will remain strong," Zainal Abidin tells reporters before leading his members to enter the court complex.

Also seen walking in is a group of elderly ladies who say they just arrived from Malacca to hear the verdict.

The DPP conducting the inquest Faten Hadni introduces the counsels that represent the parties involved in the inquest.

9.25am - Jalan Persiaran Pegawai: A group of about 10 people representing Gagasan Rakyat Malaysia 7 (Geras 7) calls for the removal of Attorney-General Tommy Thomas.

"In my opinion, the move to call the inquest in the very beginning is already an attempt to delay justice," claims Abu Bakar, a former policeman.

"Those arrested in connection with the (USJ temple riot) case should have been charged," he said.

The group also claims their struggle is non-political, for religion, the Malay rulers and the Malays as a whole.

9.25am - Coroner's Court: A court official informs the members of the media that the Shah Alam Courts Complex director had issued an order that no press conference can be conducted inside the premises today.

The official cites security reasons for the order, and requests for members of the media to cooperate.

8.55am - Coroner's Court: The public gallery of the courtroom has been filled by Adib's family members, Fire and Rescue Department officials and members of the media.

Lawyers representing Adib's family, the Housing and Local Government Ministry, and DPPs conducting the inquest have also arrived and are getting ready for the delivery of the inquest ruling today.

Security is also tight at the court, where police had set up two counters that served as check points for those who want to enter the court to identify themselves and register.

8.50am - Shah Alam Court Complex: All is calm as the media awaits the arrival of slain firefighter Muhammad Adib Mohd Kassim's family members.

The Police and Light Strike Force officers are on standby down the hill outside the court gates.

Seen entering the court lobby are officers and Adib's colleagues from the Fire and Rescue Service Department.

Also seen is PPIM activist Yusof Azmi, who says he is present to observe the proceedings today.

Outside the court complex, banners are being hung calling for justice for Adib, as well as the sacking of Attorney-General Tommy Thomas.

The Coroner's Court in Shah Alam concluded the inquest into Adib's death on July 24 after a total of 30 witnesses were called during the 41-day hearing.

Adib died at the National Heart Institute on Dec 17, 2018, after succumbing to injuries sustained during riots near the Seafield Sri Maha Mariamman Temple in Subang Jaya, Selangor, about a month earlier.

The inquest was ordered after two conflicting versions on the cause of his death emerged.

One version claimed he was hit by a vehicle while the other said he was beaten up by a mob.

During the inquest, the court heard testimony from experts on whether Adib's injuries were from being beaten or sustained during an impact with a vehicle.

Experts also gave differing views on whether Adib could have possibly died from being hit by the Emergency Medical Rescue Services (EMRS) van he was initially seated in.

Besides experts, the court also heard testimony from witnesses at the scene of the riot.

Adib's death has heightened racial and religious tensions in the country as politicians seek to exploit the case.

While inquests are set up to determine the cause of death and those who may have been involved in the incident, the magistrate in charge can't make findings as to whether anyone is criminally liable for the death.

That will be up to the Attorney-General's Chambers based on the findings of the coroner.