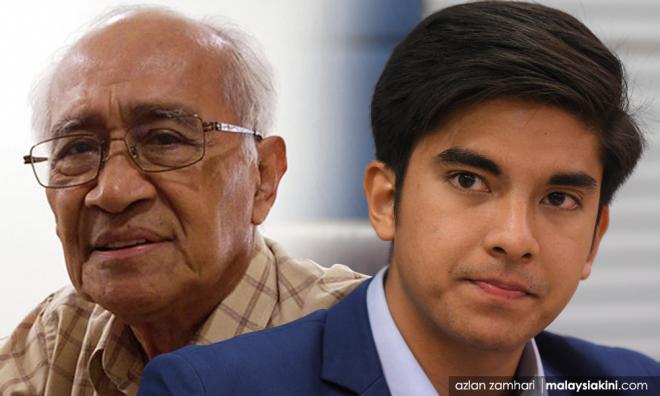 The DAP leader said while he did not have an issue with the youth and sports minister wanting to "apple-polish" Prime Minister Dr Mahathir Mohamad, he, pointed out that Syed Husin is no ordinary person.

“Who is he to question the founder member of PKR, former president of Parti Rakyat Malaysia, and a former eminent academic of Universiti Malaya in the field of sociology and anthropology?

“For his uncompromising political beliefs, Syed Husin was detained under the Internal Security Act in the mid-1970s,” he added in a statement this afternoon.

Yesterday, Syed Saddiq criticised Syed Husin after the latter's caustic remarks against Mahathir regarding the deadline for the promised transition of power to PKR president Anwar Ibrahim. He had also termed the premier's overseas trips as a waste of public funds.

However, Ramasamy said Syed Hussin, being a founding member of PKR, was entitled to question the succession issue.

“It is not about one, two or three years that Mahathir should stay in office, but his status as the interim prime minister, not for the full term but a reasonable period.

“This period might not have been specified in the Pakatan Harapan agreement, but there is a consensus that Mahathir will allow Anwar to take power in two years.

“Anwar has announced this and it is for Mahathir to set the precise date. What is so difficult about this?” he asked.

Ramasamy questioned the need for Syed Saddiq to obfuscate the issue by claiming as if Mahathir could remain at the helm for as long as he pleased.

“If we accept the notion that Mahathir's status is an interim one, that alone calls for the succession matter to be settled by May 2020, once and for all.

“It is certainly not the time to praise Mahathir for his contributions and to castigate Anwar for his non-contributions,” he added.

Regardless of whether one agreed with Syed Husin or otherwise, Ramasamy said the veteran leader should be respected for his role in politics and educating generations of Malaysians.

In the end, the DAP leader said this is not about Anwar or Mahathir, but the future of Harapan and if its leaders cannot honour a simple agreement on the transition power, how would they address the promises made to the people.

“Now with the newly formed political pact between Umno and PAS, there is a need for Harapan leaders to take the moral high ground.

“Settle the succession matter once and for all, heed the call by Syed Husin,” he added.

Syed Husin's remarks came in the wake of Mahathir, who is also Bersatu president, stating that he would be in office for a maximum of three years.

In a recent interview with Bloomberg, Anwar said he expects to take over the leadership reins next year.