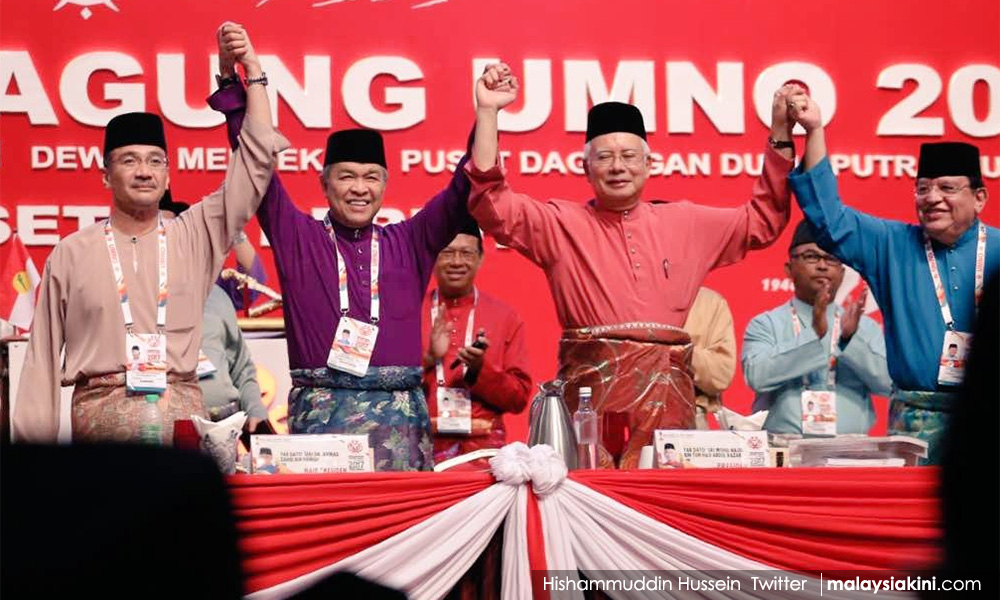 YOURSAY | ‘This Malay Dignity Congress is not the first and it will not be the last.’

Neutral Point: Well said, DAP veteran Lim Kit Siang. National unity will not be achieved if you have a congress for only a particular race. Pakatan Harapan should stop all these and instead organise a ‘Malaysian Dignity Congress’.

When Mahathir agreed to officiate the Malay Dignity Congress, his credibility and leadership as PM for all Malaysians have gone. He must step down immediately.

Meerkat: The refreshing changes we saw after GE14 were just a flash in the pan.

These institutions are now behaving like they were under BN. Which means the present government is allowing them the same leeway for misdeeds.

The finger is firmly pointed at Bersatu.

Mafeeah: Kit Siang, did you bring this up during Pakatan Harapan council meetings?

What was your nemesis-turned-friend's answer? “I don't know, I don't remember or I don't know what I am doing”?

Justice: This Malay Dignity Conference should look inwards by analysing and determining whether Malay leaders in the past and at present have failed the Malays and why?

The conference should not instil fear, worries in, and instigate the Malays against other races or religions. For example, the discussion should examine whether past and present Malay leaders truly serve or promote Malay interests, or whether they are promoting their self-interests.

Why despite 60 years of complete Malay political control of Malaysian politics and government, the majority of the ordinary Malays remained poor and whether the issue of race and religion had been abused by past and present Malay leaders for their own political agenda?

The Analyser: The Malays have lost no dignity. In fact, I would suggest that since GE14 is when the Malays have gained most dignity. They rejected former prime minister Najib Abdul Razak’s arrogance, and now they are rejecting Mahathir’s arrogance.

This congress is Mahathir living in the past when he could manipulate the Malays. He thinks by denigrating them again, they will flock to his welcoming arms. He has forgotten that the Malays rejected Umno once, they are not about to embrace an even worse Umno.

MS: There will be nothing new coming out of this other than the usual warnings to non-Malays for imagined slights and grievances, the usual threats and keris waving and the usual screaming and chest-thumping accompanied by loud incantations - as if such ranting and raving somehow restore whatever dignity was lost.

At best, it will be a tribal gathering premised on "might is right" to showcase a medieval ketuanan (supremacy) mindset which thrives on fear, anger and little else.

In such a gathering, no one can be expected to behave with dignity.

Anonymous 0123456789: In Malaysiakini ‘Yoursay’, angry commenters whack me right and left. Malaysiakini too gets bombarded for selecting my comment and for practising my freedom of speech.

I can list down hundreds of examples of statements by Chinese political leaders who challenge Malay dignity and questioning the position of Islam as enshrined in the federal constitution. But I need to only give one - the straw that broke the camel’s back.

The call by a super racist Chinese chauvinist DAP leader (Hew Kuan Yau aka Superman): “Use the Malays to screw the Malays.”

Malay dignity has never been challenged to that degree. DAP has never apologised for this, and in fact, the culprit was rewarded after Harapan won GE14.

These are the reasons why this Malay Dignity Congress has been called.

Yes, one, two or three or even a hundred irresponsible people may have said terrible things about the Malays. They do not speak for the 95 percent of the non-Malays. We are your brothers and sisters.

It's the same with many irresponsible Malay commentators on social media spewing racism against the non-Malays - but these do not represent the mainstream views of the Malays.

Mahathir wishes to get back Malay support. Umno and PAS did the same. These political parties and other irresponsible Malay leaders are playing up Malay fears to keep them in power and pursue a racist agenda for this country.

Like the great religion of Islam proclaimed - all of us come from Adam and Eve, and we are all one and the same. So, we should all be treated the same just like how the non-Muslims were treated fairly in Medina during the glorious period of Islamic renaissance.

We should open our hearts and let the goodness seep out and try to quell the demon of racism within us. God bless you.

Kit Siang, is this the most you can say? Why not condemn Mahathir for attending this forum? Are you afraid something will happen to your son (Finance Minister Lim Guan Eng) should you do this?

DAP leaders with skeletons in the closet should resign so that the party and community will not be held to ransom just to save them.

Anonymous_4020: Kit Siang, it is very obvious that your so-called friends - Mahathir and Bersatu - have a different agenda.

It is time to get rid of Mahathir with a no-confidence vote in Parliament. You have the numbers. Just get rid of him before he does more damage to Harapan.

Mahathir has already split PKR into two factions, invited your enemies PAS and Umno to have a secret meeting and now, this ‘Malay Dignity Congress’. This is not the action of an honest man.

FairMalaysian: Let one honest and brave Malay leader among the lot stand to admit their dismal failure in lifting the Malays up if indeed the Malays are still "left behind"?

Of course, this gathering is not the first and it will not be the last. There will be one day when the Malays cannot be held or kept under the "siege" called race and religion, and they will eventually learn who let them down or who are the real cause(s) of their "left-behind" story.

Dramatic as it may sound, it is about time that the Malays choose non-Malay leaders to lead them. Give them a chance and see if it makes the difference, and perhaps see where the Malay leaders have failed them.

Dominating politics as Umno has done, it has failed the Malays. Just simply ask Umno president Ahmad Zahid Hamidi about economics and finance, he will blabber till the cows come home.

And ask former prime minister Najib Abdul Razak about economics and finance, he will detail how he used to siphon off millions (or rather billions) out of the country.

Isn't it rather shameful that no Malay worth even a pinch of salt would want to organise a gathering to hammer home the shameful colossal corruption acts of their leaders?

What is the point of talking about agama (religion), bangsa (race) dan negara (nation), when they don't even have in them the decency and honesty to tell their leaders that what is entrusted to them for the good for the people should not be misused or abused?

Betraying the trust of office renders none of them as good Muslims. That is the worst sin anyone can imagine of.

yoursay
race & religion
mahathir mohamad
lim kit siang
Related Reports
Yoursay: No dignity in demanding dignity… after 6 decades of dominance
a year ago
'Not invited' Anwar trusts Dr M's message at congress will be for all M'sians
a year ago
Anwar: Let’s change narrative from race and religion to solving poverty
a year ago
Remembering Nik Aziz as nation drowns in polemics of race and religion
a year ago