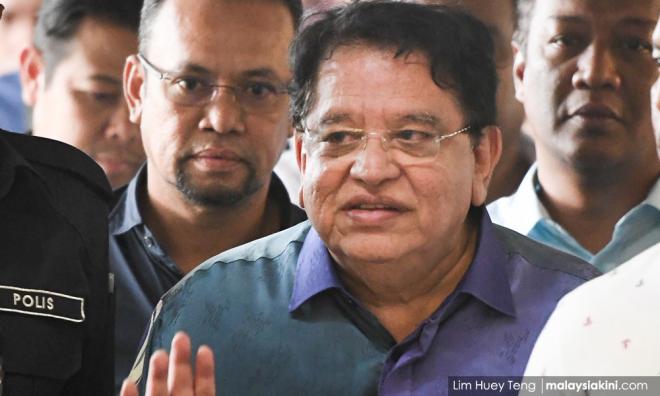 The prosecution in the corruption trial of Tengku Adnan Tengku Mansor in its submission today said there was no record of a transaction of RM2 million into Umno’s account from the company that the accused allegedly solicited the money from.

The cheque was allegedly deposited into the CIMB Bank account of Tadmansori Holdings Sdn Bhd (THSB), of which Tengku Adnan was the major shareholder.

Deputy public prosecutor (DPP) Julia Ibrahim referred to the testimony of 23rd witness, Malaysian Anti-Corruption Commission investigating officer (IO) Muhammad Saad Bordani that no sum of the said amount was ever channelled to Umno’s account either by AKSB or THSB.

"According to the witness, he investigated Aset Kayamas and Tadmansori Holdings, and a search conducted on Umno proved there was no RM2 million transaction into Umno’s account and no receipt was ever found.

"If a receipt had indeed been issued in this case, a copy should have been submitted (to MACC) as required under Section 62 of the MACC Act,” she submitted at the end of the prosecution’s case before High Court judge Mohamed Zaini Mazlan.

The DPP dismissed the defence’s contention about the investigation being incomplete as without basis since there was no document to show that the RM2 million paid to THSB was a political contribution.

She said based on the testimony of fifth witness, THSB Accounting and Finance assistant manager Rabiatul Adawiyah Sobri, there was no transaction of RM2 million from THSB’s account to Umno’s account.

“This showed that the money was not meant for the by-elections in Sungai Besar, Selangor and Kuala Kangsar, Perak.

“If the court were to view the RM2 million as being a political donation to Umno, the prosecution insists that it is to the benefit of Tengku Adnan as Umno Supreme Council member, Umno Federal Territories liaison chairman, Umno Putrajaya division chief and Umno secretary-general.

"The prosecution submits that receiving the money in his capacity as someone holding a high post in UMNO would strengthen the accused’s position in the party to his own benefit. The accused in his defence has to prove otherwise,” she said.

DPP said Tengku Adnan had the intention or knowledge of wrongdoing (mens rea) by allowing the RM2 million purportedly for political funds for the by-elections to be deposited into the account of his company (Tadmansori).

Earlier, Tengku Adnan’s counsel Tan Hock Chuan in his submission said there was no prima facie in the prosecution’s case.

He referred to Chai’s testimony in which the witness said Tengku Adnan did tell him about UMNO’s need for about RM5 million to RM6 million in political funds for the by-elections.

Last Jan 23, Tengku Adnan, 68, claimed trial before justice Mohamed Zaini after his case was transferred from the Sessions Court to the High Court on Dec 14, 2018.

He is charged under Section 165 of the Penal Code which carries up to two years imprisonment or a fine or both, upon conviction.