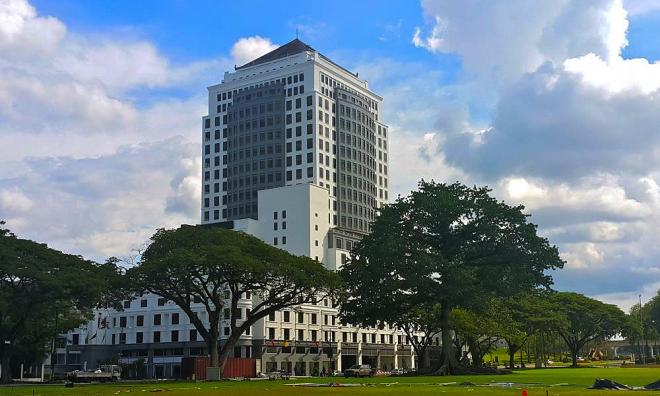 ISA SAMAD TRIAL | The Kuala Lumpur High Court was told today that former Felda chairperson Mohd Isa Abdul Samad had surpassed a mandate in the purchase of a hotel for RM160 million in Kuching, Sarawak.

The Merdeka Palace Hotel & Suites (above) was managed by Felda Investment Corporation Sdn Bhd (FICSB) which is a subsidiary of Felda.

Former FICSB legislative and secretariat division chief, Siti Salwani Mohd Salleh, 41, said she learned this after the MACC questioned and recorded her statements in relation to the hotel purchase.

"It was set in the mandate that projects of over RM100 million managed by FICSB, a subsidiary of Felda, must have the approval of the Felda board of directors.

"If this rule is not observed, the FICSB board of directors is said to have gone ahead with the investment without meeting the requirements as mandated," she said.

Siti Salwani, the second prosecution witness, said this in response to a supplementary question from DPP Afzainizam Abdul Aziz on the first day of Isa's corruption trial before judge Mohd Nazlan Mohd Ghazali.

"The hotel purchase is still valid under the sale and purchase agreement between Syarikat Gegasan Abadi Properties Sdn Bhd and FICSB.

"It was the board of directors responsibility to prepare the paperwork for approval of the purchase.

"However, no paperwork was prepared by FICSB board of directors after that," she said adding that FICSB deals in real estate investment business.

On Dec 14, 2018, Isa (above) pleaded not guilty to one count of breach of trust, and nine counts of receiving bribes amounting to more than RM3 million.

The offences were allegedly committed at Menara Felda, Platinum Park, Persiaran KLCC between April 29, 2014 and Dec 11, 2015.