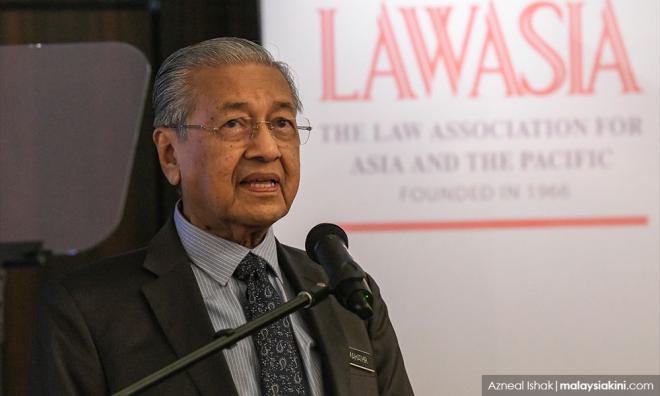 Yoursay: Mahathir seeks consensus only when it suits him

YOURSAY | 'Didn't you pick the MACC chief without consultation?'

Kim Quek: Prime Minister Dr Mahathir Mohamad has obviously pulled a fast one on the audience when he said he would have revealed the Institutional Reform Committee (IRC) report if not for lack of consensus from all the parties in the coalition government.

The report has been sitting on his desk since July 17, 2018, and since then there have been numerous pleas for him to reveal the report to seek public response and participation on the comprehensive reforms recommended. Yet not once did he respond to these requests.

It is obvious that the disclosure of the 223 recommendations of reforms encompassing all the key institutions would have embarrassed the fake reformist tremendously, since these reforms would have transformed the country into a truly democratic country of equality and justice in resonance with universal values, but, in direct conflict to his ‘Ketuanan Melayu’ autocracy.

To prove that Mahathir has not lied, will he please submit the report to the cabinet and the Pakatan Harapan presidential council for their deliberation and subsequent approval for public disclosure?

Unspin: Mahathir, there is no need to be sarcastic in responding to IRC member Ambiga Sreenevasan, who was just asking for the report to be published.

She has made a good point by saying that Malaysians are wiser than you think. If some parts of the IRC report are considered to be too sensitive, it could be redacted before it is released to the public.

DRNGSC: This old man is the king of double-speak. Whenever he feels like it, he says there is a need for consensus but often he just decides on his own.

His classic answer is the one he gave after appointing the MACC chief commissioner. He would just say getting consensus is too difficult. Discussions would have been needed, so he just decides unilaterally. It is easier that way.

So, it depends on his mood. He is a U-turn specialist and double-speak expert, and he must go.

Anonymous 770241447347646: After making so many decisions on your own, now there is talk about reverting back to your partners?

Even if you have to revert back to the partners, all you have to do is to make your decision known to them - of your approval to make IRC report public - and there won't be any objections from them.

This nation actually belongs to the citizens of this nation. With the possible exception of our defence strategies, the people should know about the goings-on in the nation.

They might be able to help in giving reasonable advice, especially those who are experts in the various fields.

Shovel Nose: What a joke. The IRC is a result of what the people want.

After coming up with a set of recommendations, it must be published regardless of whether the outcome is good or bad for the governing coalition.

Mahathir’s rationale for locking it up is laughable. I thought that he has a greater power of reasoning than most, but this is sorely disappointing.

If you were to say that the coalition needs to study it first, then give a fixed time frame before releasing it - that would have been more palatable.

It should never be an option to hold back the report if it is not pleasing to any partners' agenda.

[email protected]: Mahathir is hiding behind the coalition agreement. No coalition member has offered any view to keep it private and confidential.

It was Mahathir who made it private and confidential; Council of Eminent Persons chairperson Daim Zainuddin had said only prime minister can make it public.

MS: Indeed, Mahathir is at it again.

Ask him to swear on the Quran that he consulted with the five parties in the government before giving refuge to the preacher Zakir Naik, before appointing Latheefa Koya as MACC chief commissioner, and before issuing defensive statements in the light of the sex video implicating Economic Affairs Minister Azmin Ali.

Anonymous_3e79: That's not democracy, Mahathir, as part and parcel of the democracy is greater transparency.

Reports such as the IRC report must be made public without redaction as part of the people's right to information.

The Analyser: I’m beginning to think that the Malaysian idea of “action” is to have a conference, a forum, a congress or a committee.

Meanwhile, the country is going round and round in ever-decreasing circles while every “expert” has his/her say until the country ends up where it is now – in total confusion.

Why not start at the other end of the spectrum? Develop one or more political philosophies and policies and present the result to the whole nation (including the experts) so everyone can voice their opinion.

That approach may not result in perfection, but there is no doubt it will be better than the present chaotic mess. And, it will be a start from which a true Malaysian can evolve.

All existing politicians should be totally excluded from any deliberations because they have all convincingly shown they are not interested in building Malaysia.

No Fear Nor Favour: Mahathir, since when did you come to your senses that there are five component parties in government?

Since your senses have returned, keep your promise to PKR president Anwar Ibrahim and leave by May 2020.