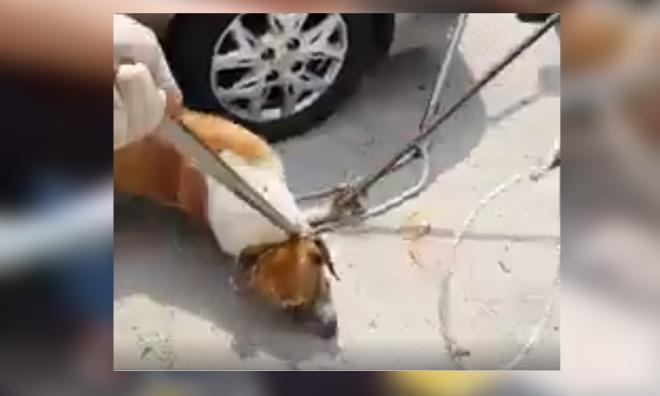 The Subang Jaya Municipal Council (MPSJ) has been urged to apologise for allegedly assaulting the man who tried to stop officers from abusing a stray dog.

Speaking to the media after accompanying his client Koh Tat Meng to report the council officers’ conduct at the Subang Jaya district police headquarters yesterday, lawyer N Rajesh called upon MPSJ president Noraini Roslan to take responsibility for the matter.

“To add insult to the injury, MPSJ issued a statement saying my client provoked them into using force against him.

“The council should be censured for this, and MPSJ president (Noraini) ought to step forward and apologise for claiming this to be the case,” he was quoted as saying in The Malay Mail.

Rajesh further called for the officers involved to be probed under Section 323 of the Penal Code, which deals with punishment for voluntarily causing hurt.

On Oct 4, Koh had confronted MPSJ dog catchers for the rough handling of a stray dog before he was seen getting into an altercation with the officers.

A video clip of the incident has since been shared widely on social media, leading to much criticism against the council.

Koh explained that he had quoted Prophet Muhammad during the altercation in the hope that the MPSJ officers would stop mishandling the stray dog.

“The officials are Muslim, and from my Muslim friends, I have learned that the Prophet Muhammad loved all animals and showed them compassion.

“I tried to remind them of this, and I did not insult the Prophet whatsoever, as you can hear in the video,” he said.

In the clip, an MPSJ officer was heard demanding Koh be careful of what he said, with regard to Islam, while pinning him against a vehicle.

The next day, MPSJ had apologised for the “lack of professionalism” of several of their officers but maintained that all regulations had been adhered to.

It explained that it was responding to the many complaints against stray dogs by local residents when officers were “disturbed” and “provoked” by a couple, believed to be referring to Koh and his wife Diong Mei Li.

The lawyer demanded that the council proves that the stray dog involved in the incident was alive and well as the council claimed.

“If that is the case, then bring the dog forward. From what I understand, animal welfare NGOs that attempted to visit the dog were instead turned away. My client has said he is willing to adopt the dog if MPSJ will release it.

“The fact that the Tengku Permaisuri of Selangor (Tengku Permaisuri Norashikin) has spoken up against this should serve as a clarion call for MPSJ in changing their standard operating procedures when it comes to handling stray animals,” Rajesh said.

After the altercation, MPSJ said that it had lodged police reports against Koh and Diong for obstructing a public servant from carrying out their duties (Section 186 of the Penal Code).

According to Koh, he was arrested at home on the same day.

He said a group of about 12 police and MPSJ officers had come to his house at 2pm and detained him before taking him to the Puchong Utama police station.

He was released at 8pm that day after his relatives posted police bail.

“I am not happy at the professionalism and manner in which I have been treated by public servants, whose salaries are paid by taxpayers like myself.

“I kept calm throughout the whole incident even though I was shoved and foul language was hurled at me. I only wanted them to understand that we should not be cruel to animals,” Koh was quoted as saying in the same article.

Meanwhile, Selangor executive councillor for Local Government, Public Transportation and New Village Development Ng Sze Han has issued an apology on behalf of the state government over the “rough actions” of the MPSJ officers.

Ng said that the council was at present investigating the incident and the government would improve on existing animal catching procedures.