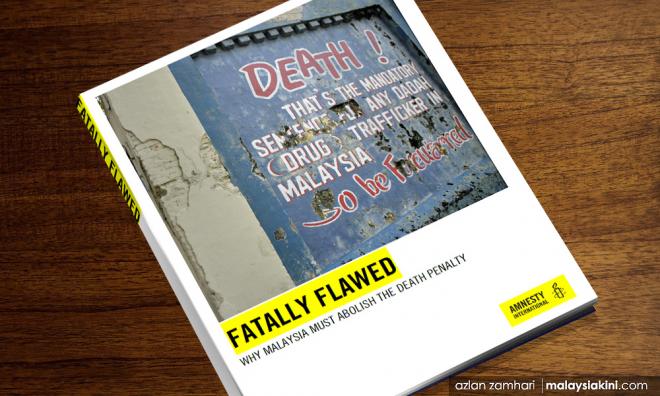 A report on the death penalty in Malaysia has highlighted inmates’ struggles with legal representation and with a “secretive” pardons system and called on the government to reform both these processes.

There are three legal aid schemes for death penalty cases, managed respectively by the judicial system, a public-private agency called the National Legal Aid Foundation (NLAF) and the Malaysian Bar.

According to the report, the Bar provides aid to all who need it before and during their trial. The system run by the courts is also available to all but does not cover pre-trial procedures like police arrests, questioning and bail.

The NLAF steps in for such procedures but its services are only limited to Malaysian citizens.

Amnesty’s report states that of the 1,281 people on death row as of February 2019, foreign nationals make up a significant 44 percent (568 people).

Aside from depriving foreign nationals of complete legal aid, the international NGO also found that insufficient funding for these mechanisms hinders Malaysians from accessing proper representation, especially those who live in rural areas and who are not able to afford a lawyer.

This proves most problematic when charges carrying a mandatory death sentence are involved.

“Lawyers and other representatives of prisoners on death row told Amnesty International that it has been a common experience for those arrested for offences that could result in the death penalty - and who cannot hire a lawyer independently - not to receive legal assistance at the time of arrest or during their time on police remand, before the charges are brought.

“[...] when a conviction may lead to the death penalty, the geographical disparity in the provision of free and competent legal assistance raises further concerns in relation to the unequal protection of the law against arbitrary deprivation of life.

“It is further concerning that because of how legal aid is structured in the different schemes that provide no free legal representatives until the trial is due to start, many defendants are left awaiting trial without any legal assistance for significant periods that have extended from months to, in most cases, two to five years,” the report read.

For foreign nationals, the report noted delays of more than 24 hours to several days before their respective embassies were informed of their arrests. This is despite international law which states that prompt communication is necessary.

Amnesty, which campaigns to end to capital punishment worldwide, called for competent legal representation be made available to all defendants.

It also called upon the police to inform all detainees of their right to legal aid.

Aside from the pre and post-trial stages, gaps in legal aid also affected the ability of inmates to acquire assistance when filing their pardon petitions, noted Amnesty.

When it was available, the report cited a lawyer’s testimony about how prison officials pre-selected inmates who would be able to receive legal aid, all of whom were Malaysians.

“The decision on who gets that support is not transparent and creates an additional degree of arbitrariness and discrimination in the death penalty system,” it said.

The NGO further urged the government to solve the delays and lack of transparency in clemency proceedings.

Pardons can only be granted by the Yang Di-Pertuan Agong and the state rulers after consulting the Pardons Board. However, clear procedures for them are not laid out in Malaysian law except for some guidelines in the Prison Regulations 2000.

In practice, the report noted that inmates are often informed of their right to clemency but not the criteria for pardon consideration.

Inmates and their families are often left without any news from the authorities for a long period after submitting their petition.

The report also noted instances of delays by prison authorities in communicating the result of a pardon petition to an inmate’s family.

“Amnesty has received information related to two positive decisions which highlighted how the outcome was communicated to the prisoners and their families with a delay of many weeks or months [...]

“Left without any feedback, many prisoners re-submit their pardon applications every four years,” the report read.

In the case of rejected clemency petitions, Amnesty noted that families were not informed of the date and time of impending executions except that they would happen “soon”.

“Some of the letters handed over to the families were dated two weeks earlier, suggesting that the prison authorities had held on to this information until only days before the scheduled date of the hangings,” it said.

Amnesty urged Pardon Boards to disclose all relevant information to inmates to allow them to prepare adequately for the pardon petitions.

It also wanted the boards to promptly update inmates, their families and their lawyers on the progress of their applications.

Following objections to abolishing the death penalty in total, the Pakatan Harapan government is now looking at replacing the mandatory death penalty for 11 serious criminal offences to allow for judicial discretion.

A moratorium on executions has been in place since October 2018 as the government mulls law reform.

Harapan had promised in its GE14 manifesto to abolish the mandatory death penalty.

Drug-trafficking the reason for bulk of death row inmates - report
10 Oct 2019
Liew: New-look death penalty law may be tabled next week
3 Jul 2019
Gov't not tabling bill to abolish mandatory death penalty on drug cases yet
17 Jun 2019
Yoursay: Death penalty debate – a law without heart has no grandeur
29 May 2019