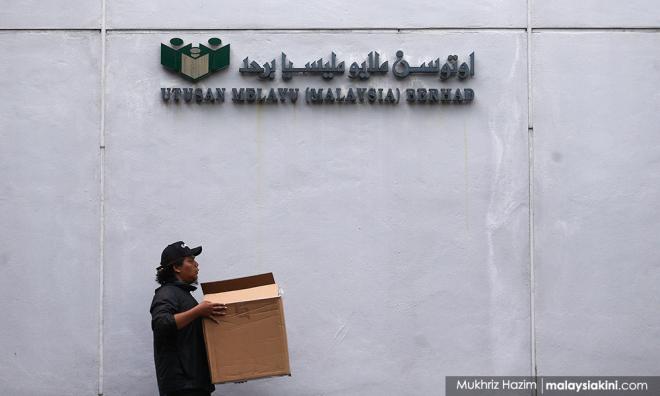 Yoursay: No true word when Utusan was publishing, no true word on its demise

YOURSAY | In the slanted coverage of Utusan, no journalist and politician stood tall and straight.

Anonymous_0668d7ab: Wrong, Umno leader Khairy Jamaluddin. Utusan Malaysia lost it when it forgot its journalistic ideals of being truthful and unbiased, being the voice of all Malaysians (instead of just Malays).

Thank God, Malaysians are a discerning lot, instead of relying on the ‘fake news’ of self-serving politicians.

Mushiro: Khairy was very quick to point fingers at former New Straits Times (NST) editor-in-chief A Kadir Jasin, to defend himself and his father-in-law.

Khairy is right about Kadir and prime minister Dr Mahathir Mohamad, but he and former prime minister Abdullah Ahmad Badawi were equally guilty of manipulating the press and the country.

For a paper that had been in publication for so long, was there a warning signal the moment its sales started dwindling?

What did the management, together with its marketing staff, do about it? Were there no meetings held to get to the root of why the circulation was dropping?

Was it not necessary to worry as it was an Umno paper? Was it thought that Umno was in power and therefore, it would always find the funds to keep it going?

Ironically, they had this congress about Malay dignity, while 800 Malay journalists were going to lose their jobs.

No jobs means no way to feed the family, to pay for bills, to provide for the children. Yet, these people had worked for a newspaper that stood and fought for Malay dignity.

Even Umno washed its hands by giving all sorts of excuse. Apparently, there is no money. What about the billions and millions stashed away in the accounts of some individuals? What about the hundreds of party warlords?

PAS was even uglier. Even before the paper expired, it tried to woo Utusan's readers to jump ship to its party organ, Harakah.

Mat MD: Utusan used to be regarded as the best Malay newspaper. Its reports were written in beautiful Malay, attracting wide readership, both Malay and non-Malays, for the news and as a means to improve their command of the national language.

As time passed, Utusan started to turn politically biased in its reporting, giving wide news coverage to Umno, turning racist and blaming the non-Malays for the maladies and the failures that they suffered, instead of looking for the weaknesses that led them to their failure.

Its circulation started to decline miserably. Its decline in circulation was entirely due to its editorial staff, who lacked foresight, who were bigoted and bereft of business experience, churning out news which was offensive and insensitive.

In order to survive profitably (when it is relaunched), it has to show balance in its reporting, be factual and allow space for people to give opposing views.

Thinking Aloud: The poor Utusan workers, who worked so hard for Umno bosses all these years to run down Umno’s political enemies, have become the victims of those they served.

Legit: Utusan failed in its journalistic mission, and instead started to publish garbage.

It was nothing but an Umno mouthpiece, failing to be objective, instead glorifying the BN government, and covering up its wrongdoing for decades.

Indeed, it all started with Mahathir and continued with Abdullah Ahmad Badawi and Najib Abdul Razak.

The journalists and staff members who worked for Utusan were all complicit in the garbage churned out, and they are now paying for their karma.

The same fate awaits the other newspapers as well if they don't buck up and return to their journalistic ideals.

Tidak Harapan: Utusan had been the play toy of Umno, spewing propaganda and racial issues against non-Malays. It was never a genuine newspaper. It deserves to die.

Political parties should be banned from owning newspapers and other media, directly or indirectly.

It's time to remove the worst weapon against free press - government licensing.

Anonymous_1399778124: Indeed, the chicken has come home to roost. The rot began during Mahathir’s time, continued with Badawi, and was exacerbated during Najib's time.

There has never been objectivity, integrity or impartiality in mainstream media all those decades.

All this railing and ranting and pointing fingers show the rot is pervasive. It all began with Umno. Politics and demonising others were the name of the game.

Kadir should not sound so smug and self-righteous. He was one of the main players of that game.

I can attest to that as I saw first-hand, as an editorial staff member at NST, how the mainstream media was controlled by Putrajaya.

When former deputy prime minister Anwar Ibrahim was arrested for Sodomy I, there were at least two occasions when the front-page lead of NST was not a news story as it should be, but an editorialising piece running down Anwar.

It is no coincidence that Kadir was the group editor of NST then. Even then, he was already a loyal servant of Mahathir's.

Kim Quek: Indeed, Utusan’s circulation plunged drastically when it was reduced to an organ of slander and lies to destroy Anwar following Mahathir’s sacking of the former in the Sodomy I saga in 1998.

Since then, Utusan’s decline has been a one-way street as Umno has never ceased to use the newspaper as a propaganda tool to wreck the opposition.

The alarming thing is that Mahathir is once again laying his hand on this disreputable news organ.

Though Utusan is now undergoing liquidation, it is destined to be re-incarnated under the new ownership of Syed Mokhtar Albukhary, a loyal crony of Mahathir.

What is the motive of Mahathir for gaining control – through Syed Mokhtar’s controlling shares – of one of the largest media empires in the country, consisting of a string of TV channels and newspapers?

Isn’t such a move inimical to the New Malaysia pledged to the electorate?

Salvage Malaysia: The country’s rot started with Mahathir. But along the way we forgot and forgave Mahathir because the administration under Najib was so bad.

I just never thought that despite Mahathir saying all the right things then and his teary-eyed video which captured our emotions, Mahathir would go back to his old ways after becoming the PM again.

It’s such a big betrayal of the rakyat who supported him. Many of us are dumbfounded.

Redmann: The rot continues. Unless our minds are not bigoted by a steady stream of prime ministers (prime monsters) we have had the misfortune to reign and rule over us in the name of shared power and authority, we are doomed as a people and as a nation.