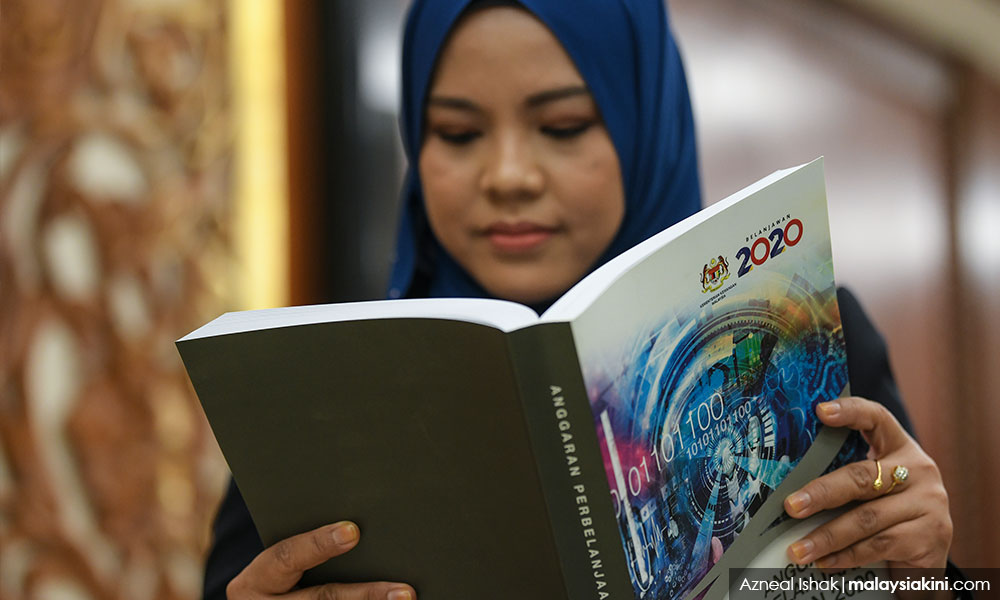 Yoursay: A prudent and yet caring, inclusive budget

YOURSAY | ‘Harapan shows we can be prudent while pursuing the B40’s wellbeing.’

LIVE: M'sians must be united for 'New M'sia' to succeed

Gerard Lourdesamy: This is a brilliant budget from the Pakatan Harapan government and the honourable Finance Minister Lim Guan Eng. It was expansionary and populist while maintaining a semblance of fiscal prudence.

All races have a lot to cheer about. In one fell swoop, Harapan allayed the fears of Malays and East Malaysian natives about being ignored and left out by the government. In the process, Umno and PAS got the rug pulled from under their feet.

It was an inclusive and progressive budget that heavily favoured the rural and urban Malay voter base and the national agenda to uplift the B40 (bottom 40 percent) and M40 (middle 40 percent) groups. Chinese and Indian voters were also not neglected.

The naysayers being the usual racists, eternally pessimistic critics without any practical or pragmatic solutions, and fake news peddlers with false names, will have nothing good to say about this budget except that it was inspired by the Liberation Tigers of Tamil Eelam (LTTE) or the DAP's anti-Malay/Muslim bias.

The Harapan government should just ignore these race-baiters and proverbial haters. Let them just rot in the cesspool of their own creation. Eventually, when the money runs out, these paid commentators will go silent.

Vgeorgemy: Indeed, Harapan has proven that it can adopt prudent fiscal policy while pursuing wellbeing of the B40 community.

William Wallace: According to the commentaries in Bloomberg and Reuters, the fiscal and monetary policies and reforms projected by the Finance Ministry is very responsible.

Business confidence will increase and GDP growth is targeted at 4.8 percent. This is pretty impressive for Malaysia given it is a semi-developed country.

I think Lim is doing a fantastic job in rationalising and consolidating the balance sheet of the Malaysian economy. Well done!

BH Yap: Such an impressive increase in the allocation for education (from RM60.2 billion to RM64.1 billion) is useless unless the funds are correctly used to rectify the weaknesses in our education system.

What is the use if we use it to fund the study of khat? Or to ensure everyone wears black shoes?

Joseph_183: Lim, reducing the threshold for foreigners to purchase local properties from RM1 million to RM600,000 will only encourage property developers to continue to build properties above RM600,000 as the profit margin is higher.

I don’t believe this.

S Kumar: In calling for Malaysians to unite for 'New Malaysia’, how does Lim define “Malaysians”?

Does it include Chinese and Indians and other non-Malay/Muslims? Those whom Prime Minister Dr Mahathir Mohamad claims to be ‘orang asing’ (foreigners)?

Can we unite while the Malay Dignity Congress takes place and Mahathir officiates it?

Mahathir must please the Malays to stabilise his Bersatu party. What is there to say and prove that the Harapan government is 'New Malaysia?

People are arrested under the Security Offences (Special Measures) Act 2012 over the Liberation Tigers of Tamil Eelam (LTTE) issue. On the other hand, the rule of law does not apply to the Islamic preacher Dr Zakir Naik.

So, what is new? Nothing has changed. So, you politicians, stop talking about 'New Malaysia’.

Big Data: The budget is a waste of time when so much of citizens' precious energies are wasted on Mahathir and his crises.

He is going to trigger more crises with the sole purpose of staying on past the agreed two-year term.

The Analyser: Basically, the government has evaded all of the major problems that have been plaguing this nation for generations. It paid them off with more handouts that resolve nothing.

Meanwhile, to cover their unwillingness to “bite the bullet”, they pursue frivolous distraction like e-wallets, e-sports, and digital social responsibility.

Vijay47: As Lim worked himself up to a frenzy as his two-hour speech drew to a close, as he hysterically urged the nation to bersatu and berganding bahu (unite and join forces) for our society that holds aloft principles of harmony, practising religious and racial tolerance while we marched to a glorious future, I was already weeping copiously, so moved was I.

My only regret was that I had no ready Jalur Gemilang to wave furiously.

For 2020, he outdid the promises he made last year and lest you think that non-Malays came out empty-handed, Chinese and Tamil schools will receive RM50 million each and - be still, my beating heart - the Indian community (kindly referred to as “ethnic India” and not Mahathir’s “orang asing” India) have been assured a fabulous RM120 million!

The rest of the speech didn’t have anything to write home about, just the usual trivialities like business guarantees for bumiputeras running into RM500 million plus another RM445 million for some adventure called training and business premises-maintenance, RM810 million for Felda settlers, and something about planting pulut rice in Langkawi.

Oh, I forgot – the total allocation for usawahan (entrepreneurship) and bumiputera institutions comes up to a trifling RM8 billion (you read that right, folks).

There was also a chicken-feed RM1.3 billion for the Islam Development Department (Jakim) and early Christmas gifts of additional allowances for all manner of Islamic religious teachers.

Just another day at the office, except that the silly finance minister, he did not even once mention Malay dignity. Maybe next year.

yoursay
budget 2020
lim guan eng
pakatan harapan
Related Reports
Budget 2020: What Ministers and Opposition politicians are saying
a year ago
Budget 2020: Tell us what you think
a year ago
Quiz: What do you stand to gain from Budget 2020?
a year ago
Wee cries foul over 82 pct funding cut for MCA-owned college university
a year ago