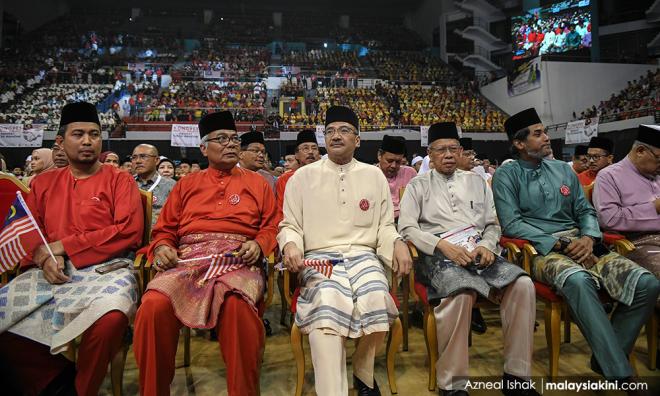 David Dass: There is nothing wrong with Malays coming together to discuss issues concerning the Malay and Muslim community. Although there would be questions raised if the Chinese or Indians or Kadazans or Dayaks organised similar gatherings.

The reason for these meetings is important. The Malay Congress was organised by some universities. Public universities.

The tenor of many of the speeches was quite incendiary. All sorts of allegations were made against non-Malays. The position of non-Malays as citizens in this country was questioned.

Even Prime Minister Dr Mahathir Mohamad said that the division of Malays politically resulted in dependence on non-Malay support. And that, in turn, required Pakatan Harapan to cede more power to non-Malays.

Are non-Malays responsible for all problems the Malay community faces? That is the question International Trade and Industry Minister Darell Leiking asks.

Where does this kind of thinking leave the people of Sabah and Sarawak? Particularly, the non-Muslim bumiputras? Does anyone have a vision of a united Malaysia with all Malaysians working for the betterment of all Malaysians?

With such a mindset, especially when it came from the academia and Malay leaders of the day, it does not resound as the vision for an inclusive and tolerant society to propel the country towards modernisation and to aspire for greatness.

It only exposes the paucity of intelligence and the will to work hard to earn a living. It also manifests streaks of insanity for not being able to ascertain the needs of the country.

What a sheer waste of time. What a show of stupidity to the world at large in a globalised and media-savvy world. It reminds me of the Malay proverb, ‘katak di bawah tempurung’ (a frog under the coconut shell).

Just A Malaysian: There is nothing in the resolutions of the Malay Dignity Congress about leaders stealing billions from public coffers and thus impoverishing millions of poor Malays.

Nothing about Malay leaders under the guise of defending Malay-Muslim steal and cheat governments projects and budget.

It is all about more power-grabbing. Such handicapped mentality coming from supposedly the brains of Malay community is very disappointing.

It shows the pure lack of thinking and analytical capability that the Malay needs to get out of the present abyss. It is a sure sign of total failure of the Malay race.

Newday: When a conference’s title is ‘dignity’, it is a reasonable expectation that resolutions would actually reflect the title. But no, there is nothing here that indicates dignity will be instilled.

Mahathir did discuss in his opening speech the need for Malays to look for solutions from within, but going on the resolutions, his plea in this direction was ignored.

Instead, we have resolutions based around gaining power at the cost to all that are not Malay and those Malays that don't follow the Sunni sect.

The call for Jawi in government essentially will see English disappear. The call for all senior political and government positions to be Malay only has zero dignity, as all is handed on a plate to the recipients.

Patronage, cronyism and corruption will reach new levels that even former prime minister Najib Abdul Razak might find daunting. Public education will stay as it is now - dumb. Religious persecution will go through the roof.

This is the future they prescribe. Can even one conference delegate tell me how any of this raises dignity? It just shows that the attendees don't have a clue as to what ‘dignity’ means.

Be prepared – non-Malays and liberal Malays - for an increasingly rocky road ahead. All these resolutions have done is to continue to empower the dark and backwards-looking racist and religious supremacists to go for our collective jugular.

There is nothing dignified in any of these outcomes.

Rupert16: Blaming others when there is not even a mention about massive corruption, rent-seeking, mismanagement and abuse of power (to cover up for corruption) by Malay leaders under the guise of bangsa dan agama (race and religion). Macam ini mana ada maruah? (If like this, where got dignity?)

If anything, it’s most disgraceful on the Malay bangsa for not speaking up against their corrupt leaders.

Freethinker: Yes, not a single resolution mention about punishing corrupt Malay leaders who were found stashing millions of cash in their homes.

Not a single word of mention that it is the Malays themselves who make the Malays poor and uneducated Malays ignorant of what is right from wrong, as long as they are Muslim.

Not a single word talking about bringing up the Malaysian economy or working towards unity. This Malay Dignity Congress is about self-gratification at the expense of the other races.

Proarte: Basically, what the Malay Dignity Congress is advocating is that non-Malay and non-Muslim citizens must not have a say in the running of the country, that is, they should not have any democratic rights and should be shut out from political power. In short, they should be 'Pak Turut' of the Malays. How nice.

What they have not considered is why are the Malays in their current situation? Who was running the country for the past 60 years, which resulted in the Malays supposedly feeling inferior, lacking in dignity, educationally backward and economically behind?

The cause is the Malay leaders themselves who irresponsibly made hundreds of constitutional amendments and policy changes over the years, which destroyed the foundations of good governance.

The Malay-Muslim ruling elite robbed the nation blind through kleptocratic cronyism and in order to do this, they dumbed down the education system, overwhelmingly Malayanised and corrupted the civil service, brought Islam into the political and public domain through 'Islamisation', thus isolating the Malays further from other races.

This made them vulnerable to racist and religious scaremongering and develop an irrational feeling of victimhood, despite their unjust privileges.

The doyen of kleptocratic cronyism is none other than Mahathir, with Najib, his protégé, having the dubious distinction of being the world's greatest kleptocrat.

Mahathir's modus operandi has managed to bring the Malay-Muslim race to international recognition as a people of low morals, hypocrites, lazy people riding on the hard work of others and racists who cannot ratify treaties wanting to end racism and genocide.

If the Malay-Muslim leaders are the cause of Malay failures, why are Malays clamouring for Malays only to hold positions of power? This will only to damage them further.

Surely, if Malays are not stupid, they would be clamouring for excellent leaders and individuals with high integrity to rehabilitate our broken institutions. Why are they concerned about race or religion of the individual? Isn't this stupidity of the highest order?

The Malay Dignity Congress is not offering any solutions in order to uplift the Malays. By reinforcing racism and Islamic bigotry, they will not improve the lot of the Malay people one iota.

All they have done in the eyes of the world is to portray themselves and the people they supposedly represent as a pathetic, shameless, inferior and morally delinquent people with no dignity.

Vijay47: Any motivational book will inculcate on the powers of positive thinking, just as books on psychology will reveal that self-adulation is a reflection of an acute inferiority complex.

Yet unmindful of the fact that good wine needs no bush, mythical sermons like the supremacy of the Malay, the global importance of the Malay language and a strange slogan that the Malays will never be lost from the world, are repeatedly shrieked from the podium.

And thus, a congress on Malay dignity, whatever that creature be, is born again.

The wonder is not in the nature of the demands itself, it is that the supreme race, on which the sun will apparently never set, can openly, shamelessly, strut about begging bowl in hand, claiming as a matter of right the fruits of others’ labour.

It would not be lost on anyone, except sadly the Malays themselves, that the gathering of mendicants did not even once refer to the raising of the skills and talents of the Malays so that they too, like the Indians, Chinese and other Malaysians, could harness their fair share of the abundant harvest the country offers, that they also could touch the stars with pride and yes, with dignity.

While man is condemned never to learn from history, the greater misfortune is that the Malay seems unable to be enlightened from even more recent events; the demands of the congress focus almost exclusively on the need for Malays to lead, and that too, to head every single facet of life.

They seem so unaware that our descent into abject backwardness, where we now have to compete with Laos and Myanmar, is the product of what is politely referred to as Malay leadership.

How firmly they disregard the truth that the very need to be begging in a land of plenty is due to their self-wrought inefficiencies and institutionalised corruption.

The Malay wants to lead us? Where to? Eternal damnation? So quickly they appear to have forgotten lessons never learned from 1MDB, Felda, Malaysian Airlines (MAS), and every government-linked company (GLC) created only to feather the nests of crooked Malays.

Fostering all this is a cunning man hiding behind a false veneer of statesmanship and supposed wisdom gleaned from his many years. The irony is that when the Malay keeps swallowing, hook, line and sinker, a celebration like a congress on dignity is so inevitable.

Gerard Lourdesamy: What these resolutions propose to do is to treat the non-Malays and non-Muslims as a sub-class of citizens in the country.

The vast majority of the resolutions were contrary to the Federal Constitution, the tenets of democracy, the rule of law and fundamental freedoms.

It is a disgrace that public universities and academicians would want to organise and take part in a congress that reeked of Malay and Muslim supremacy in a country where nearly 48 percent of the population by definition is not Malay.

FellowMalaysian: Having read the insensible and highly racial-charged and extreme demands made in the Malay Dignity Congress, I fully agree with DAP veteran Lim Kit Siang in querying whether it is time too that the Chinese and the Indians or Kadazans should make their own demands.

But I am dead certain that Mahathir, as the PM of the people of all races, has no bloody business to attend this congress. On the other hand, as a Malay-Muslim PM, he should have the dignity and respect for other minority races by attending their dignity congress if they hold one soon.

Kangkuong: Mahathir said, "Malays have had to rely on non-Malays in order to win the elections.” As such, he said, the sensitivities of the non-Malays also need to be taken into consideration.

What kind of a leader are you? It is not about the sensitivities of non-Malays, just because they have given you their votes. It is the right of all Malaysians - Malays and non-Malays - who have and have not voted for you.

Yoursay: Are there no level-headed moderate Malays?