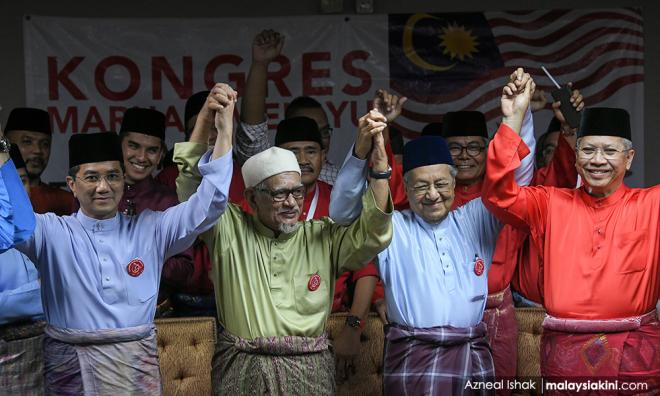 Yoursay: Are there no level-headed moderate Malays?

YOURSAY | 'If you are a Malay and you are reading this comment, I pray that you will speak out…'

Our leaders, when they are overseas, cry out against ethnic cleansing, the oppression of the minorities, etc. They speak out strongly against racism. They talk about fairness.

Back home in Malaysia, they are just a bunch of hypocrite cowards.

In this modern era, everyone in the world is talking about diversity and inclusiveness. Everyone knows the evil of racism. However, we have leaders who think otherwise.

In my daily job, we have been promoting diversity all the way. While it is not an easy thing to embrace because of unconscious biases, we, on every step, will make an effort to prevent such biases from happening.

However, this group of leaders are openly portraying racism as part of good values. The behaviour of this group of Malays is shameful and they are worse than the Ku Klux Klan in the US (at least they cover their faces).

If you are a Malay and you are reading this comment, I pray that you will speak out if you believe that racism is not one of the values that should be associated with Malays or Muslims.

Shame them. Despise them. Make a change to make sure Malaysia will progress to a better era.

JW: This is racism at its height, its most blatant, and its ugliest. As I have always suspected, the victim is never ever responsible for things messing up.

And by always playing the victim card, they are provoking the non-Malays without worrying about tearing up our unity because they view the non-Malays have the monopoly on bringing disunity to the country.

With this kind of public display, I wonder where the moderate Muslims are now, if they are really any? Will they be able to voice their moderate Islam? Will they fight for a Malaysia where everyone contributes equally by building on the best and the beauty of diversity?

Will cooler minds prevail after this congress?

Ranjit Singh Malhi: Malay Dignity Congress organiser Zainal Kling needs to be reminded that the Malay rulers in their 1956 memorandum to the Reid Commission, which drafted the Constitution of the Federation of Malaya, stated that they "look forward to a time not too remote when it will become possible to eliminate communalism as a force in the political and economic life of the country" .

The Reid Commission recommended that the special privileges of the Malays (entry into public service, scholarships, permits and licences) should be reviewed after 15 years and the government should "determine either to retain or to reduce any quota or to discontinue it entirely".

Indeed, the difficulty of giving one community a permanent advantage over others was realised by the Alliance Party, which submitted that "in an independent Malaya, all nationals should be accorded equal rights, privileges and opportunities and there must not be discrimination on the grounds of race and creed..."

Hence, the resolutions aimed at enhancing the special privileges of the Malays are totally unwarranted. I urge all Malaysians to think and act rationally for the future well-being of our nation.

As Perak Sultan Nazrin Shah summed it up well, let us pray "that Malaysia would be placed under trustworthy and sincere leaders who would carry the voice of moderation, voice of reason and friendship so that the people of various races and religions in the country could live in peace and harmony".

Bersatu kita teguh, bercerai kita roboh (United we stand, divided we fall). Finally, let me reiterate that our beloved nation belongs to all Malaysians and not exclusively to one ethnic group.

Mat MD: The Malays started to show initial progress, in social, political and educational spheres, only after the implementation of the affirmative action in 1969, after the May 13 racial riots.

The non-Malays, the majority of whom lived in the city, not like the Malays who lived in rural areas, were well advanced economically, leaving the Malays very far behind.

The Malays, as late starters, are now trying to play catch up but are still left behind, making the economic gap between them and the non-Malays growing wider and wider. Feeling frustrated and hard to find jobs, especially among the graduates, they feel that they are left as an underclass in their own homeland.

The demands made by the Malay Dignity Congress are seen as the right solutions to address their plight. They feel that their Malay rights have been eroded and abandoned.

This trend is also echoed in the developed countries, such as America and Europe, where the whites think that their well-being is being threatened by the influx of non-white immigrants

It is wise if the Malaysian government will adopt a policy that will cater specially to help the Malays to progress, in both economic and educational fields, in order to close the wide economic gap.

Once economic parity among all the communities is achieved, no community will feel that its community is being threatened. Hence, they will be able to live in peace and harmony as fellow Malaysians.

Malaysian Expatriate: @Mat MD, I do sense your sincerity in your comments. However, I must say that the developed countries like the US, Canada, Singapore, Australia and UK are actually extending their arms far and wide to take as many well-qualified immigrants available as fast as they graduate because these developed countries do not want to lose out on the global competition.

Malaysia, with its short-sightedness and the shiok sendiri attitude, is actually demanding the government policies to retard the more progressive races so as to hopefully able to catch up with them.

BagusCurryPuff: So, who decides who gets all these top jobs? The people organising this conference, some new government agency or representatives from whichever political faction holds power?

Who gets the jobs? The poor and most deserving Malays or those who have 'influence' - those who can pay? Which brings us back to patronage, which in turn gives us kleptocracy – it is history repeating itself.

How about spending money on education and giving all the skills they need to compete and better themselves? Maybe a bit of focus on giving people pride and self-respect, instead of handouts.

Ramesh Nair: It is interesting how they are promoting institutional racism and citing religion and law.

The entitled attitude just because they are of a specific race or religion and not by merit, will definitely cause the downfall of this nation.

The nation’s existing race-based policy is akin to the abolished apartheid policy. The difference would be apartheid was for minority, bumiputeraism was developed for the majority.

Being a majority and yet having such rallies shows how the politicians are manipulating the racial and religious sentiments in the country. How the elite abuse the loopholes benefiting themselves and the general population is left in the lurch.

This kind of gathering is a dangerous precursor to disharmony in a multicultural environment. Can the Chinese, Indians and other minorities have a similar gathering and discuss similar demands and topics?

The Constitution is what matters. Invoking what’s not being questioned and trying to cause ruckus is akin to treason in many nations.

Guess what, Mahathir and his race-based policies are the main reason we are at the current situation. I guess, as a nation, we have a long way to go.

Existential Turd: Apa lagi Melayu mahu? (What more the Malays want?) When it comes to collecting taxes, it is not separated into Malay tax, Chinese tax or Indian tax. How come when it comes to spending the tax money, the Malays should be given priority?

It is rather strange that a congress devoted to discussing Malay dignity is officiated by someone with a habit of lying, duplicitous and treacherous character. Is this what Malay dignity is about?

Ipoh PP: The writing on the wall is clear. As non-Malays, we are mere taxpayers for others to enjoy the benefits of positions and special privileges.

It’s time to drive into our young ones and prepare them to work hard, excel, save money and move on. Many have already left, seeing what’s happening. The quicker the better.

This land is not ours and it’s better to go where our services and work will be appreciated and our children's future will not be hampered or stagnated.

Hello: Any leader that implements any of the resolutions and demands of the Malay Dignity Congress will tear this Malaysia asunder in no uncertain terms.

This congress is nothing but an expression of racism by these extremists and Mahathir is encouraging these racist theologist extremists. The picture of Mahathir holding hands with PAS leader Abdul Hadi Awang and the other extremists paints a vivid picture of what he is.

Malaysianheart: I wonder whether the speeches made are really helping to promote dignity of any kind.

I understand dignity is about respect, integrity, holding to true values as human beings and for all human beings. Perhaps you can learn something from Yahya Cholil Staquf, who leads the 50 million-member Nahdlatul Ulama movement in Indonesia, and look at what they are saying.

Doc: "They also want the government to only appoint Malay-Muslims to top positions within the government such as the chief justice, attorney-general, secretary-general to the government, inspector-general of police, chief of defence forces and others."

I was under the impression that the chief justice, secretary-general to the government, inspector-general of police, chief of defence forces are all Malays. Does that mean the current Malays holding these positions of power are "not Malay enough"?

The Analyser: Aren’t these five resolutions a measure of Malay insecurity?

They have nothing to do with dignity.