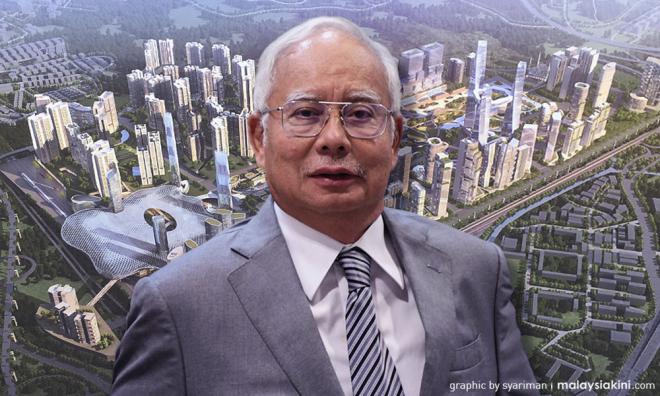 In his speech on the Budget 2020 in the Dewan Rakyat today, Najib said that while Lim pointed out that debt repayments for the two companies would be RM2.7 billion next year, he didn't mention about revenue made from the Bandar Malaysia project earlier this year.

"(The finance minister) confirmed that Bandar Malaysia, a project owned by 1MDB, is being continued but the revenue from this project will only be announced later.

"Why didn't the Pakatan Harapan government say part of the project had been sold for RM7.41 billion in April? Lim only talks debt and is silent on the returns.

"The fact is, the Bandar Malaysia project is valued RM140 billion and the Tun Razak Exchange project at RM40 billion. He once called it the best assets in the country. But he's too shy to talk about it now," said Najib.

Najib did not mention that 1MDB's debt bill - some RM32 billion - will take many more years to clear nor does he mention SRC International having any meaningful assets.

He is currently being charged for laundering money in relation to both companies.

In April, the cabinet had in principle decided to reinstate the Iskandar Waterfront Holdings (IWH) and China Railway Engineering Corporation (CREC) consortium as the main developer of Bandar Malaysia.

The Najib-administration had sold the rights to develop the project to IWH-CREC in 2017, but later inexplicably axed it and returned the consortium its RM741 million deposited.

How ICSB got back Bandar M'sia after botched Najib-era deal

Najib also took issue with Lim for stating in his Budget 2020 speech that Vision 2020 was derailed after Malaysia was turned into a kleptocracy which involved the pilfering of RM150 billion of government money.

"What is part of the RM150 billion figure? How can 1MDB's RM32 billion debt, with assets that are very valuable, suddenly become RM150 billion?

"Although Lim could not substantiate his previous claim that RM19.2 billion was "robbed" by the previous administration, I'm willing to give him a benefit of the doubt," said Najib.

He said that if what Lim said was true, then the Public Accounts Committee should probe the matter.

"If not, Lim should be penalised and stop turning the budget speech into a platform for political speeches," he said.

On the 4.8 growth target set by the federal government, Najib said no other expert in the world was as optimistic.

"No other experts believe that growth will be higher next year. Only the Harapan government believes so," he said.

He warned that unrealistic growth predictions might hurt government coffers, just as what over-optimistic oil price predictions for 2019 did.