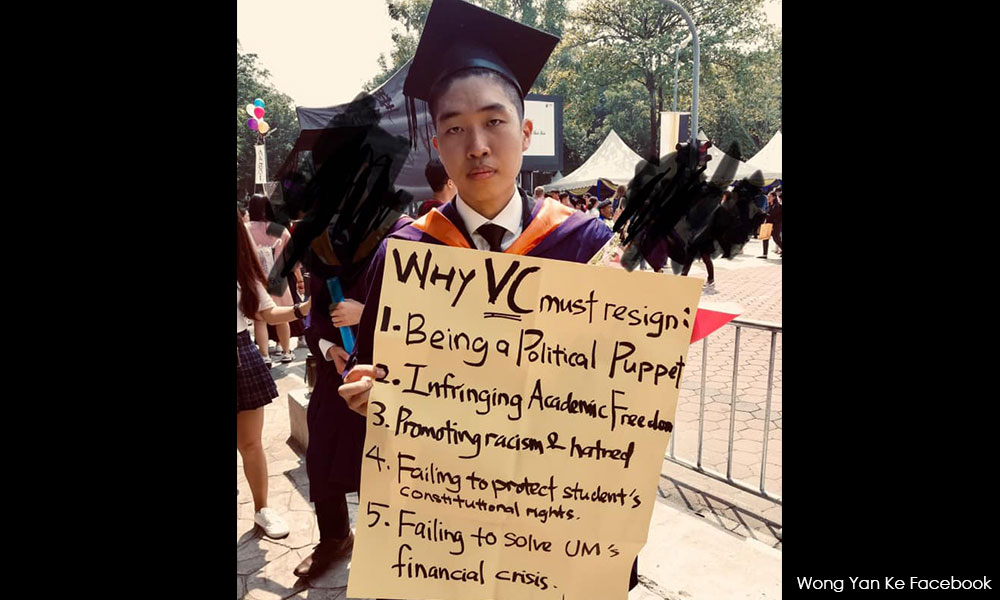 Yoursay: Who is ‘kurang ajar’? The vice-chancellor or student?

YOURSAY | ‘What crime did the student commit to warrant a police report?’

Brandon: Yes, every student has the right to air his or her grievances and complaints, but not in this way. Not in a solemn ceremony in the presence of the sultan. Indeed, it is very rude.

Having said that, he should be let off with a warning, nothing more.

Quigonbond: Rude and unacceptable is one thing. But did the graduate commit any crime? If not, why lodge a police report?

As an institution of higher learning, Universiti Malaya (UM) fails to appreciate what freedom of expression means. It is only giving lip service to the concept.

If it was not a right place, then it was also not a right place for the UM vice-chancellor (Dr Abdul Rahim Hashim) to “protest” and speak about the loss of Malay dignity, speculate about the social contract, and giving his version of what it represents.

As a vice-chancellor, he should be in the business of educating students, not creating friction among the different races.

A warning and the confiscation of the placard should have been enough. The police report is too harsh.

Anonymous 2475091498015598: Indeed, the university shouldn't make a police report, but should consider the student’s grievances.

A vice-chancellor should not overtly show his racism and should not participate in a politically-slanted gathering.

Don’t Just Talk: There is nothing wrong with student activist Wong Yan Ke calling for the VC to resign when the VC was involved with the Malay Dignity Congress.

What has befallen the Malays and their dignity is not caused by the non-Malays, who neither question the Constitution nor steal from the Malays.

Just look at the daily news. Who are those charged for corruption and abuse of power?

Mission Accomplished: Wong may have picked an inappropriate time and place to voice his grievance but he should not be deprived of his rights to freedom of speech.

Pray, what criminal offence has he done? Let the vice-chancellor defend himself.

Ian2003: Goodness, what has this got to do with the police?

Intimidation? What are the police going to charge Wong with? Is there an Act which provides a criminal offence for breaching university protocol?

UM is the prime university in the country, where young impressionable minds are educated and developed, and this is the kind of VC who helms the university.

Gutenberg: Why is the VC keeping so quiet? Why is he not defending himself when he is getting the brickbats?

He can speak so boldly at the Malay Dignity Congress, but now he is as quiet as a mouse. It is so cowardly of him to make a police report to suppress the student.

Anonymous_0668d7ab: Surely the police have a guideline on what warrants a police report.

Surely we can make better use of police resources to combat corruption, criminality, terrorism, rather than appeasing someone’s ego.

Oriole: These young students are standing up for justice and equality.

Instead of applauding the courage of these young people, the stupid institution is trying to ensure that these students get police records.

So your ‘face’ is more important than your ability to connect with your students? This is what happens when mediocrity is promoted into high office.

Thickskin: Those calling for Wong’s degree to be revoked are clearly not highly educated.

Wong has fulfilled all the conditions to get his degree. That cannot be taken away, just because he makes a bold statement against the VC.

It is a disgrace that the university, unable to think of any means of saving face, resorts to making a police report. Such shameful behaviour.

P Ramlee: Wong and Yap Wen Qing, I salute both of you for your bravery. The two of you are great role models for university students.

Please continue to speak up against racism, now that you are going to start contributing to society.

Newday: Wong, good on you even if your one-person protest was an exercise in futility. You exercised your rights to highlight a wrong.

Frank: For those who think that what they have been doing is nothing but dignified, why don't they look at themselves in the mirror?

For six decades, there was never any congress talking about dignity - even when some were stealing money. In fact, they kissed the hands of the plunderers, joined in the merriment.

May Allah (swt) the Almighty and Merciful deal with you and your kind appropriately and the soonest possible.

And may all of his other creatures see the lessons from your crime of silence, that collusion will never pay. Not in the hereafter and not in this world.

Suq Madeeq: One can shout “kafir”, “pendatang”, “orang asing”, and insult non-Malays openly in a large gathering. That is not rude.

One student holding a placard denouncing racism. That is rude, and a police report is lodged.

FreeSarawak: Wong has learnt his lessons well. He is able to think critically.