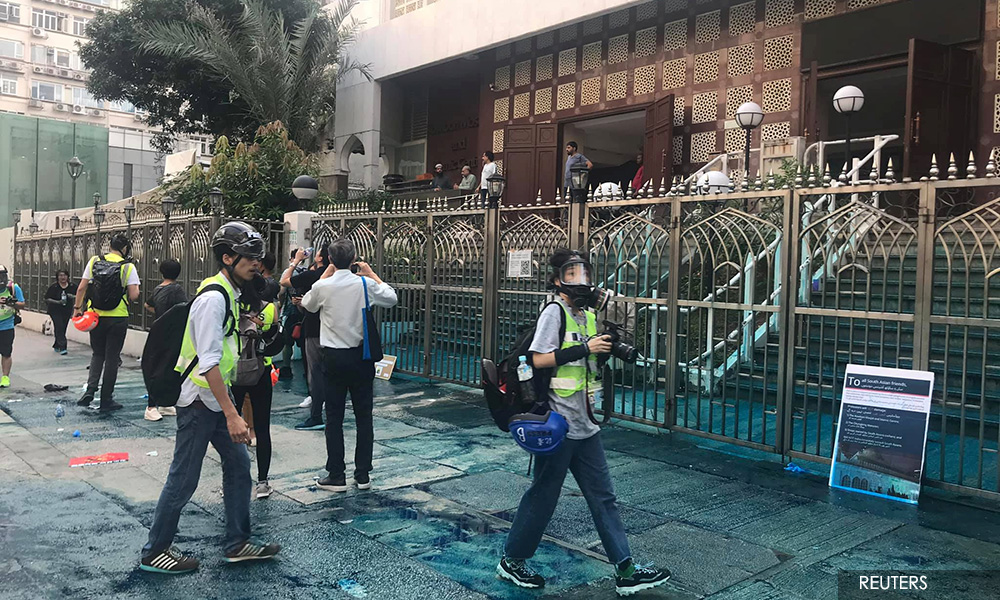 Hong Kong leader Carrie Lam apologized on Monday after police hit a major mosque with water cannon as they battled protesters during another day of political unrest in the Asian financial hub.

Lam visited the mosque before she was due to head to Japan to attend Emperor Naruhito’s enthronement ceremony in Tokyo, and as the city cleaned up the mess from violent protests the night before, the latest in five months of political turmoil.

In one instance, a cannon drenched the front gate and steps of the Kowloon mosque, Hong Kong’s most important Islamic place of worship where a few people had gathered, including journalists. Blue stains remained on the road in front as worshippers gathered for prayers on Monday.

Lam visited the mosque on Monday morning dressed in a shawl, and apologized to Islamic leaders, according to a spokesman.

Chief Imam Muhammad Arshad said the apology was “accepted” and that the Islamic community hoped to continue living in Hong Kong in peace.

The police said in a statement the mosque had been accidentally sprayed and that they “respect religious freedom and will strive to protect all places of worship.”

Elsewhere across the Kowloon peninsula protesters had torched stores and sprayed graffiti on roads as they skirmished with police.

After two weeks of relative calm, Sunday’s large turnout of tens of thousands reflected strong support for the anti-government movement despite police branding the march illegal.

Families and the elderly took to the streets in what began as a peaceful march, many wearing masks or carrying umbrellas to shield their faces in defiance of an anti-mask law that authorities invoked this month to try to quell the unrest.

They targeted banks and other businesses perceived to be linked to China, damaging some store fronts and setting fires on the prime shopping and commercial street of Nathan Road in the heart of the Kowloon peninsula.

Protesters are demanding universal suffrage, an independent inquiry into alleged police brutality, amnesty for those charged over previous demonstrations, and an end to the government’s labelling of the protesters as rioters.

Many Hong Kongers are angry at what they see as mainland China’s attempts to limit the freedoms the semi-autonomous city is supposed to enjoy under the “one country, two systems” principle enshrined in its handover from Britain in 1997.

She also has promised to withdraw a China extradition bill that ignited the unrest and engage in a dialogue with the public, but has so far resisted other protester demands.

The protests pose the biggest popular challenge to Chinese President Xi Jinping since he took power. Beijing has denied eroding Hong Kong’s freedoms, and Xi has vowed to crush any attempt to split China.

As the economy faces its first recession in a decade, Hong Kong Financial Secretary Paul Chan on Sunday offered more support for small- and medium-sized enterprises which have borne the brunt of the chaos.

“We are studying the launch of the third round of relief measures,” he wrote on his blog.

Businesses will probably have to foot the bill for the vandalism, as few had insurance for riot damage, industry insiders said.

Protesters are planning a demonstration at a shopping mall in the northern Yuen Long district from 7 pm on Monday to mark three months since activists were attacked by a mob in the area.

More than 100 men stormed Yuen Long station on the night of July 21 and attacked democracy protesters, passersby and journalists.

Metro operator MTR Corp said it would shut Yuen Long station by 2 pm ahead of the planned protest.

Several subway entrances and exits would also be shut, and the entire network would close by 10 pm, or two hours early, to allow time for the repair of facilities, the operator said.