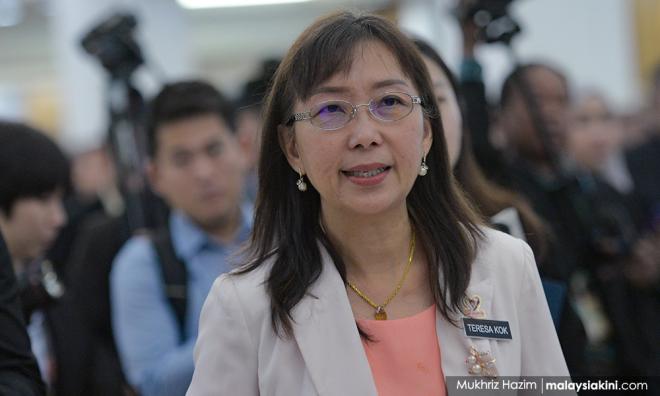 The Primary Industries Ministry has urged the Solvent Extractors' Association (SEA) of India not to deter its members from importing Malaysian palm oil over remarks on New Delhi’s action in disputed Kashmir.

Minister Teresa Kok (photo) said while Malaysia is trying to understand the underlying sentiment associated with SEA’s advisory, its call for its members to refrain from buying Malaysian palm oil “is a major setback in our progressing cooperation and working relations between Malaysia and India”.

"I view this development with great concern, given the significant and long-standing trade relations that we share between our two nations.

"It is important for SEA and the Malaysian palm oil industry to continue to work closely together and act as an effective bridge to promote good relations between the two countries," she said at the 1st Palm Oil Supply and Demand Outlook Conference in Bangi today.

Kok noted that Malaysia and India have shared a long-rooted historical and cultural commonality, as well as a good diplomatic and trade relationship.

For SEA, palm oil, particularly from Malaysia, is a key raw material that allows profitable operations of their members involved in the local refining industry throughout India.

Responding to a question from the media later, Kok said so far no formal communication was issued by the Indian government on the matter.

"This is (just) a call made by SEA and as for our next move to overcome this issue, I will leave it to the prime minister and also foreign minister to handle the rest," she added.

Mahathir in his speech at the 74th session of the General Assembly had said “despite UN resolution on Jammu and Kashmir, the country has been invaded and occupied,” and called on India to “work with Pakistan to resolve this problem”.

Earlier today, Mahathir said that Putrajaya has no intention of bringing up the issue to the World Trade Organisation as the call for boycott did not come from the Indian government.