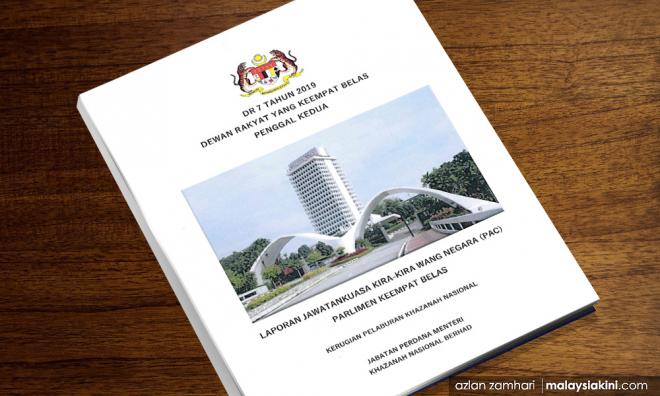 TM, MAS and leadership change: Khazanah explains why it lost RM6.3 billion in 2018

Losses incurred from the sudden change in telecommunication policy, continuous financial woes of national carrier MAS and a temporary freeze on its operations were among the reasons Khazanah Nasional found itself RM6.3 billion in the red last year.

This was the national sovereign wealth fund’s explanation to the Public Accounts Committee (PAC) in a study of its sharp turn in financial position in 2018.

Just a year before, Khazanah had posted a RM2.9 billion profit.

In PAC’s report, published yesterday, the fund’s managing director Shahril Ridza Ridzuan attributed its 21.6 percent drop in net worth to low dividends from its investments, Telekom Malaysia (TM) in particular.

He said TM had incurred deep losses in 2018 due to the Pakatan Harapan government’s “sudden” decision to implement the “double the speed, half the price” broadband policy.

Shahril (above) commented that the policy was “non-conducive” for the communications sector and had impaired TM‘s cash flow.

“We have advised the (Multimedia and Communications) Ministry that if it was possible in the future to give more time to the industry to restructure their costs so they can make reasonable profits, while including new policies from the government,” he was quoted as saying in one meeting before the PAC.

Another major factor was MAS, which has struggled to post a profit despite years of fund injections and restructuring exercises by Khazanah.

Shahril explained that the fund’s RM6.3 billion loss was caused by an increased impairment of RM7.3 billion.

Of that amount, the airline had cost them RM3.1 billion in impairment, which Khazanah had to declare. Impairment happens when the market value of an asset is below its book value.

“In 2018, MAS basically lost over a billion ringgit. Because of that, quite clearly the fair value (market value) of MAS can no longer support the cost of investment,” he told the PAC.

Aside from low dividends and troubled assets, Shahril noted that the third reason for Khazanah’s loss in its 2018 earnings was the six-month freeze imposed upon it after GE14.

The freeze effectively prevented the fund from trading any short term investments.

“In that period, no one could make any decisions until the (new) board of directors and top management were appointed. Its failure to operate in that period had a big impact on Khazanah’s earnings,” read the PAC report.

The report did not detail how much money was lost in this period.

In late July 2018, seventy-seven days after the May 9 general election, all nine members of Khazanah’s board submitted undated resignation letters to the Harapan government.

New board members were announced four days after that and Shahril himself was appointed in early Aug 2018.

Too many eggs in too few baskets

Shahril also remarked that up to 85 percent of Khazanah’s investments had been “over-concentrated” in about ten companies, exposing it to a lot of risk should the economy dive.

He was optimistic, nevertheless, that the fund would be back in the black this year after it restructured and diversified its investment portfolio, as the PAC advised.

The PAC hearings began on Apr 1 this year.

Moving forward, it plans to cut overall operating costs by up to 40 percent over the “next few years”.This includes closing down unnecessary overseas and domestic offices.

Shahril said Khazanah will “probably” close down its KLCC office and consolidate operations in its KL Sentral location.

“That saves us about RM20 million a year, just in rental alone,” he said.