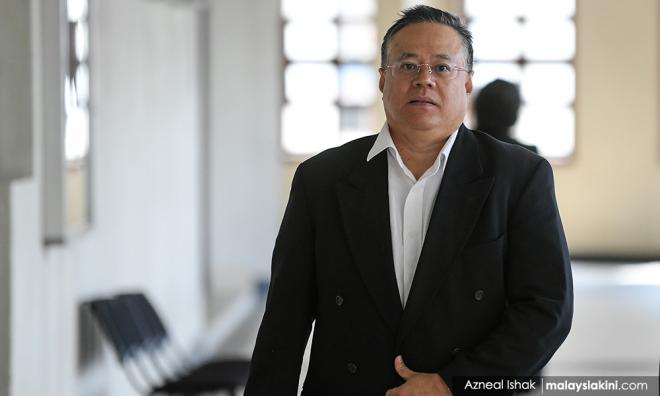 A former board member of Gegasan Abadi Properties Sdn Bhd (Gapsb) told the High Court here today that he had given bribes totalling RM3.09 million to Mohd Isa Abdul Samad after receiving 'salam' (greetings) from the former Felda chairman.

Ikhwan Zaidel, 59, (above) said the money requested by Isa Samad for political work was handed over through nine meetings with Isa Samad's former special officer, Muhammad Zahid Mohd Arip, with the money placed in paper bags.

Reading his witness statement in court, Ikhwan said he handed over the money to Muhammad Zahid between July 2014 and December 2015 at different locations.

"Muhammad Zahid contacted me every once in a while to convey 'salam' from Isa. I understood the meaning of the word 'salam’ and acceded to the request (for political funds).

"After being contacted by Muhammad Zahid, I would contact the owner of JV Evolution Sdn Bhd, Azizi Abdul Wahab, to withdraw the money and give it to me so that I can hand it over to Muhammad Zahid," he said during the examination-in-chief on the 10th day of the criminal breach of trust and corruption case against Isa Samad over the purchase of the Merdeka Palace Hotel & Suites (MPHS) by Felda Investment Corporation Sdn Bhd (FICSB).

The 16th prosecution witness said during the first meeting, RM100,000 was packed into a paper bag and handed over to Muhammad Zahid (above) at the Hilton Hotel in Petaling Jaya, in July 2014.

Ikhwan, who is also the former managing director of Gapsb, said that in October 2014, Muhammad Zahid had contacted him to send 'salam' to Isa Samad (below) and he then contacted Azizi to withdraw RM300,000.

He said the money was handed over to Muhammad Zahid at his (Ikhwan's) home at the Sunway Opal Condominium in Petaling Jaya between Oct 17 and Oct 24, 2014.

"I also handed over RM500,000 to Muhammad Zahid at my house between Dec 4 and 7, 2015. I told Muhammad Zahid that this was the final payment of the RM3 million for Isa.

"I believe that all the money I gave to Muhammad Zahid was for Isa. After the money was handed over, I no longer received any requests from Muhammad Zahid to collect money on behalf of Isa," he said.

Mohd Isa, 70, faces one count of CBT and nine counts of receiving gratification for himself amounting to more than RM3 million, allegedly committed at the Menara Felda, Platinum Park, Persiaran KLCC, between April 29, 2014 and Dec 11, 2015.