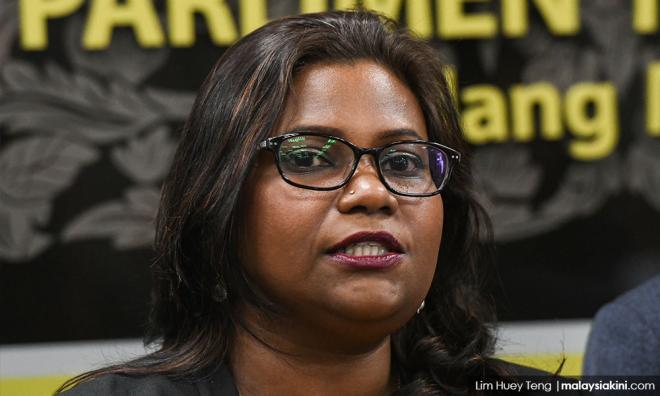 With Deepavali just two days away, DAP lawmakers have urged the police to release those detained under the Security Offences (Special Measures) Act 2012 (Sosma) for their alleged links to the defunct Liberation Tigers of Tamil Eelam (LTTE).

Rather than detain them without trial, Batu Kawan MP Kasthuri Patto (photo) called upon the authorities to charge them in open court in the interest of justice.

“My appeal to the government is to charge them in an open court or to please release them before Deepavali.

“There are other criminal laws and acts that these men can be tried under. But to use Sosma on them is simply unacceptable, and infringement to their fundamental rights and liberties,” she said in a statement today.

Among the 12 arrested under Sosma, four are from DAP.

“It will not be a Deepavali celebration this year to DAP and Pakatan Harapan knowing that our comrades are still held behind bars under the draconian Sosma law when they should be charged in an open court,” the Wanita DAP international secretary added.

Earlier this week, IGP Abdul Hamid Hamid said that investigations were “speeding up” but could not promise any releases before this Sunday, stressing that arrests had been done on grounds of “national security”.

Teluk Intan MP Nga Kor Ming (below) appealed to Hamid to expedite the probe and either charge or release the suspects.

“Police should have completed the investigation by now and release the detainees (who were arrested) regarding the LTTE issue.

“We appreciate and respect the police’s effort in combating terrorism...if the police are really convinced there is solid evidence against the detainees, the suspects should be brought to court for a fair trial and at least be given a chance to defend themselves.

“I personally appeal to the IGP to complete the police investigation now and release the detainees under Sosma so that they can return home to celebrate Deepavali with their family,” he said in a separate statement.

“Since 1966, DAP has always been against all forms of terrorism and violence,” the Perak DAP chief stressed.

The four, along with factory technician S Arivainthan, have denied any links to the defunct Sri Lankan organisation and filed for habeas corpus, which requires an arrested person to be brought before the court to secure their release.

Their application is set to be heard on Oct 31.

The wives of Saminathan, Suresh Kumar and Chandru have since embarked on a hunger strike outside Bukit Aman until their husbands are released.

Pakatan Harapan had promised to abolish draconian provisions in Sosma in pledge 27 of its GE14 manifesto.