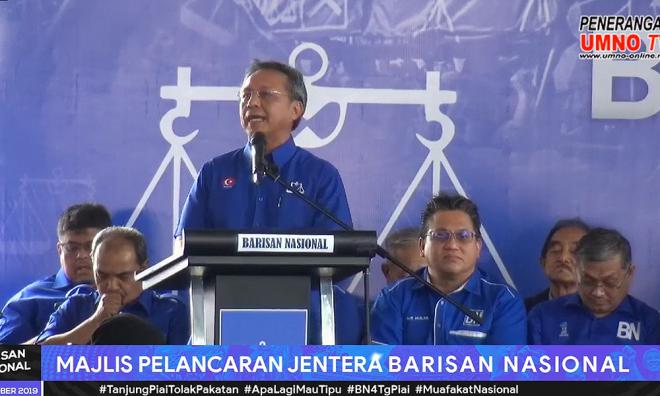 Johor Umno chief Hasni Mohammad has made a passing dig at the age of Bersatu's candidate for the Tanjung Piai by-election.

"Their candidate (Karmaine Sardini) is 66, going to be 67 next year, hopefully there won't be another by-election. Elections are tiring," Hasni said.

He was speaking at the launch of BN's machinery for the by-election today.

BN was scheduled to announce their candidate today as well, but Hasni said this was a bluff.

"They (Pakatan Harapan) were fooled by us. They wanted to announce on the 30th, but when they heard that we were going to announce at 4pm (today), they announced first at 2pm.

"So they were defeated, we will not be announcing our candidate today," he said.

After giving salutations to all the BN leaders present at the launch, Zahid called for a short prayer for Farid and others who have passed away.

"Farid passed away too young, a doctor, medical expert is gone. He was a good man, that was his track record.

"But God willing, our candidate will be better than the dearly departed," the BN chairperson said.

Zahid said the BN candidate will also be a local, and promised an announcement on the matter would be made soon.

However, there have been calls for Umno to contest the seat instead.