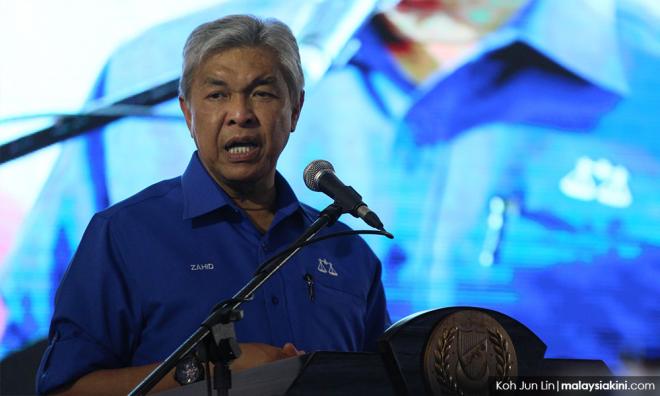 Umno president Ahmad Zahid Hamidi has already warned BN not to sabotage itself, despite having yet to reveal its candidate for the Tanjung Piai by-election.

With less than a week before nomination day, Zahid, who is also the BN chairperson, will soon need to make a call on whether Umno or MCA will contest the seat.

He was speaking today at the launch of the coalition’s machinery for the by-election.

Lobbying has been intense and Zahid noted that he had been asked by various quarters to hold back on announcing the candidate.

"God willing, our candidate will be local. But (Johor Umno chief) Hasni Mohammed has instructed me not to announce the candidate today.

"MCA president Wee Ka Siong, he didn't give any instruction but he too whispered to me not to announce it yet," he told hundreds of supporters at the Pontian Umno headquarters today.

Zahid said while BN lost due to "slander and false promises" in the last general election, another key factor was sabotage.

As such, he said BN could not afford a repeat of such incidents in the Tanjung Piai by-election.

"Don't try to sabotage our machinery. The reality before us is that voters want BN to win again. If there is sabotage, threats or undesirable attempts, we will end up losing.

Zahid said BN's chances in the Tanjung Piai by-election looked promising, considering the coalition only lost by 524 votes in the last general election.

He said records showed some 3,000 Umno members had chosen to stay home in the last general election, while some 800 votes were rejected.

Furthermore, he noted that in the last general election, a total of 2,962 people had voted for PAS, which is now an ally of Umno.

As such, he said if BN could overcome all the factors which had worked against it in the last general election, it stood to regain some 6,000 votes, more than enough to recapture the seat.

The by-election was called after Bersatu's Mohd Farid Mohd Rafik passed away from a heart attack last month.

Tanjung Piai has been a traditional MCA seat but there is intense lobbying for Umno to be given the Malay-majority constituency.