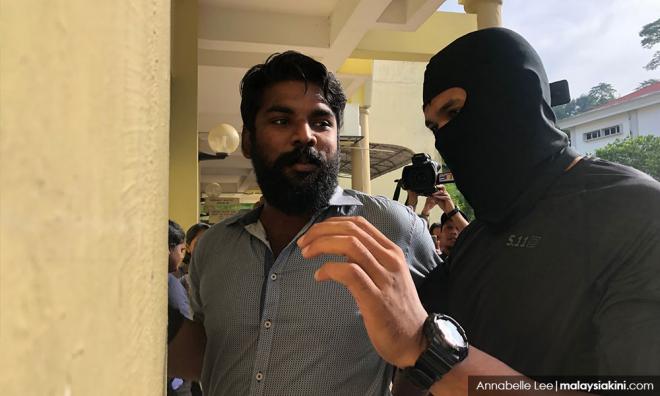 LTTE case: Kepong PKR to give police space to complete probe on member

Kepong PKR has acknowledged one of the accused charged yesterday for possession of materials linked with the defunct terrorist group Liberation Tigers of Tamil Eelam (LTTE) was its former division head.

Even so, despite pleas by the wife of the accused A Kalaimughilan (above) for the party to support and speak up for her husband, who she claimed was innocent, the division said it would not be getting involved.

Instead, it said it would be giving authorities space to complete its investigations.

“The Kepong PKR leadership sympathises with the situation faced by Kalaimughilan and his family, and we would like to express our appreciation for all of his contribution towards the PKR struggle [...] when he was division head.

“Even so, we as a political party which respects the separation of power as practised in this democratic country, will be giving the police and Home Ministry enough space to complete their investigations,” current division head Na’im Brundage said in a statement today.

Na’im also promised the division would organise welfare assistance to the accused’s family should the need arise.

Kalaimughilan, a 28-year-old scrap metal businessperson, was charged in Selayang yesterday with two counts, under Section 130JB(1)(a) of the Penal Code, for possession of items related to LTTE.

He was among 10 suspects rounded up by police during a three-day LTTE crackdown to be charged in various courtrooms across the country yesterday.

The charges levelled against the 10 accused ranged from supporting LTTE to possession and display of materials links to the defunct terrorist group.

Two other suspects are expected to be charged tomorrow.

Kalaimughilan’s wife, M Tamilmalar, broke down outside the Selayang Sessions Court, questioning the silence of PKR leaders in her husband’s case, despite the latter being an active party member.