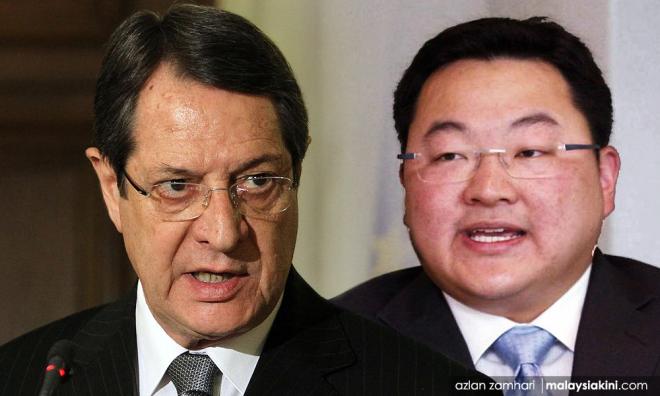 Cyprus President Nicos Anastasiades has indicated that the passport issued to fugitive businessperson Jho Low should be revoked.

"Absolutely yes," he was quoted as saying by Cyprus Mail when quizzed on this.

However, Anastasiades (above), who was asked to comment on reports of Low being granted citizenship despite alleged links to the 1MDB scandal, added that a probe must first be carried out to justify the revocation.

Quizzed on the dubious granting of citizenship to foreign investors, the president said some of the cases “speak for themselves.”

"And there may well be others [requiring review] which have not come out in public.

“All those granted citizenship in breach of the [updated] stricter criteria, shall see their citizenship revoked as swiftly as possible, period,” he added.

Anastasiades also cautioned against blowing the issue out of proportion.

"If, for example, among some 4,000 citizenships granted, it is found that 10 or 15 may not be up to par, I don’t think it justifies all this uproar so that – and it might be down to honest mistakes – we drag our country’s name through the mud," he added.

Cyprus Mail also quoted Anastasiades as defending the overall government-backed investment scheme which Low, along with many other controversial figures, had used to secure a Cyprus passport which also granted them status as European Union citizens.

“Unfortunately, we are trying on our own to wreck what has been a driver for construction companies, for services offered by lawyers, accountants, and other professions.

“It is through growth that unemployment has declined substantially, and in general the country is on a growth trajectory," he said.

Cypriot daily Politis on Sunday reported that Low had secured a Cyprus passport on Sept 18, 2015, after he fulfilled the criteria under the Cyprus Investment Plan (CIP) to make a cash deposit of five million euros (RM23 million) in a Cypriot bank for three years and purchase of a permanent home worth at least 500,000 euros (RM2.3 million).

Responding to the Politis report, Cypriot Interior Minister Constantinos Petrides (above) yesterday said the government would review the CIP and look into claims that Low had secured the citizenship despite background checks raising several red flags.

The US Department of Justice believed that at least US$4.5 billion has been misappropriated from 1MDB and is working with Malaysia to recover the allegedly stolen funds.