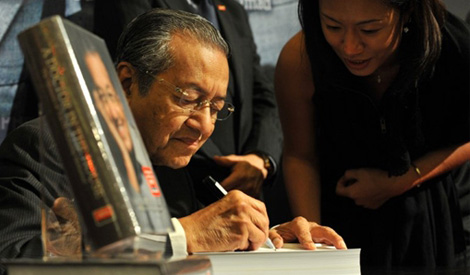 Yoursay: Time for the doctor to leave the house

YOURSAY | ‘Mahathir's sarcastic statements are supercilious but of middlebrow significance.’

In the process, his shackled everyone to a political philosophy which was immoral, divisive, intellectually untenable and economically unsustainable. The corruption of governmental institutions and grand scale larceny was a by-product of Mahathirism.

Mahathir is the last person on earth which Malaysia needs if we want to break away from a failed political philosophy and the path to a failed state.

The fact that Mahathir feels he is the best person at the age of 94 to continue to lead Malaysia despite his devastating legacy is proof and admission that his regime produced no younger generation talent qualified enough to lead Malaysia.

If this is not a stark reflection of his failure and total incompetence as a leader, I do not know what is.

Anonymous_51096329: Mahathir is not the right person to run the country. Just look at how he damaged our judiciary system which led to cronyism, nepotism and rampant corruption during his first term of 22 years as premier.

He also damaged Malaysia’s education system when he was the education minister in the 70s. Now in his second term as PM, he still has no intention to rectify it.

While he is already nonagenarian and should have more compassion towards his fellow citizens of all races, he still wants to polarise Malaysians of different races to strengthen the position of Bersatu in Malay community and to overtake PKR in the near term.

Enough is Enough: We vociferously beg to differ, Mahathir. You are not the saviour of Malaysia. The voters who voted for Pakatan Harapan in the 14th General Election are ones who saved the country.

Please do not give yourself this messianic title. On the contrary, you have done more damage to the country across so many areas than can be enumerated in a simple response here.

Ericomc: Mahathir's sarcastic statements are supercilious but of middlebrow significance. He is an egocentric person, thinks he is infallible, wants to be ‘numero uno’ (number one) forever and loves to be worshipped by his supporters.

The longer he stays as PM, the quicker we will see the gradual demise of Harapan and the New Malaysia dream.

Therefore, PKR president Anwar Ibrahim together with PKR, DAP and Amanah have to work closely with the East Malaysia opposition blocks, as well as the third force in Peninsular Malaysia, to quickly boot out Bersatu from the coalition.

Siva1967: Dear Mahathir, enough is enough. Your use-by date has come and gone. There is no such thing as only you can solve the problems.

You were needed to bring down Najib but that was because you put him there in the first place.

Now that your objective has been achieved, please honour the agreed pact. Step down and let Anwar take over. The new leadership will need to undo your damage and prepare for GE15.

From the way the rakyat look at it, you are doing more damage to Harapan and each day, your antics only confirm that Harapan will be a one-term government.

What the country is going through is not a big problem if level-headed people sit at the helm and make decisions in favour of all Malaysians regardless of race or religion.

For once, please stop your politicking ways and focus on the betterment of all Malaysian. So please decide on a date and hand over to Anwar to stop all the negative speculations and also in one swift move, get rid of those who are aiming for the premiership.

The best date will be to handover on Dec 31, 2019, as that will allow Anwar to have a fresh new year start. The rakyat will know what to do if Anwar also deviates from the reformasi agenda.

Bravemalaysian: Mahathir, if you are comparing only a single person, perhaps so (that you are the best man for PM).

However, a government consists of a team, and a team of talented, passionate and committed people of integrity will beat any single superman hands down.

I am sure Anwar can assemble a much better team than the one you put up and thus, can definitely handle the governing of this country much better than you alone.

Right now, it really looks like, and true to your character, very much a one-man show. You are dispensable Mahathir, certainly very dispensable. I am sure this country can do a lot better with a good team.

The present team is really messing up the country further, rather than bringing it forward. Thanks for your great service, but I think it's time for you to really spend your last few years in peace with your family.

Athena: Mahathir, all of your choices for the position of prime minister when you stepped down were wrong and disastrous.

Anwar is not your choice but the joint decision of the Harapan presidential council.

We have had too much you and your nonsense. Your divide and rule, and your shrewd dirty politics have only caused disharmony and suspicion among the people.

Step down and let Anwar take over soon, like yesterday!

The Analyser: Mahathir may well be right, but he’s making a really awful job of running the country and its democracy into the ground

And Anwar is doing nothing to prove he’s worthy of the job. In fact, just the opposite. He’s doing the Malay thing of doing nothing and expecting huge rewards in return.

Gaji Buta: I once had a boss who did not think anyone else could do his work.

He stayed in the same position for years and did not accept any promotions as he kept whining that no one is ready to take over. We felt he was happy with where he was, in control of his own little empire.

One day, he was fired. The block in the drain was suddenly gone. One of us took over his post, and many others were given more responsibilities and made more autonomous.

There was no farewell party for him. He was not missed and the firm did not close shop. The environment was better and we reached greater heights.

yoursay
mahathir mohamad
pakatan harapan
anwar ibrahim
Related Reports
Zaid not surprised Dr M's 'anointed' successors viewed as failures
a year ago
Succession plan: 'Court intrigue' fails to faze Anwar
a year ago
Yoursay: Tanjung Piai a referendum on Mahathir’s leadership
a year ago
Yoursay: A special law to punish racist politicians and 'lock them up'
a year ago