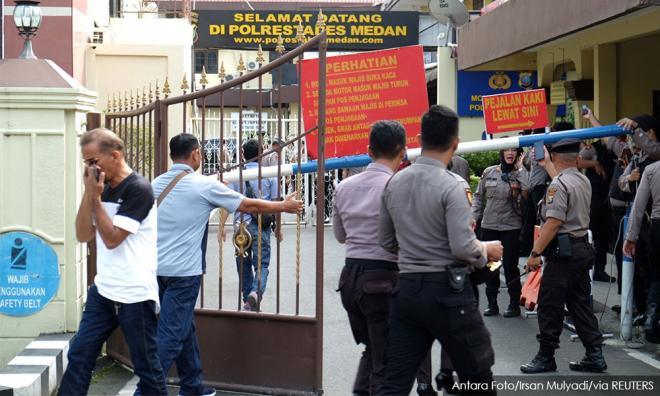 Indonesian anti-terrorism officers shot dead two suspected bomb makers during a raid on the weekend and arrested more than a dozen as authorities linked a suicide bombing last week to an Islamic State-inspired network, police said on Monday.

A 24-year-old student blew himself up outside a police station in the city of Medan in North Sumatra province last Wednesday, killing himself and wounding six people.

Police had initially declared the attacker to be a "lone wolf", but a national police spokesperson said on Monday the student along with 22 other suspects in the area had links to the Islamic State-inspired Jamaah Ansharut Daulah (JAD).

JAD has been blamed for a series of attacks in recent years and was banned in Indonesia last year for "conducting terrorism" and being affiliated with foreign militants.

"(The network in) North Sumatra has direct links to JAD," police spokesperson Dedi Prasetyo said in a statement, adding that a leader of the group had been arrested.

"Their main target is the police," Prasetyo said in comments broadcast on television.

Of the 23 suspects, two suspected bomb-makers were shot dead on Saturday while resisting arrest, while one officer was wounded during the raid, said Prasetyo.

Bomb-making material was seized, he said.

Four suspects had turned themselves in and the others had been arrested, he said.

Indonesia, the world’s most populous Muslim-majority country, has seen a resurgence in militancy in recent years, with police frequently the target of attacks.

Hundreds of suspects have been detained under tougher new anti-terrorism laws brought in at the beginning of the year after a series of suicide bombings linked to the JAD group killed more than 30 people in the city of Surabaya.

Last month, a man affiliated to JAD was named a suspect in the stabbing and wounding of the then security minister.

Stanislaus Riyanta, a terrorism analyst, warned that militants could intensify attacks in retaliation for the death of the Islamic State leader, Abu Bakr al-Baghdadi, who killed himself last month during a US commando raid on his compound in Syria.

"Alert levels for terror acts must be ratcheted up because of the momentum that's usually associated with the Christmas and New Year period for radical groups to act," he said.