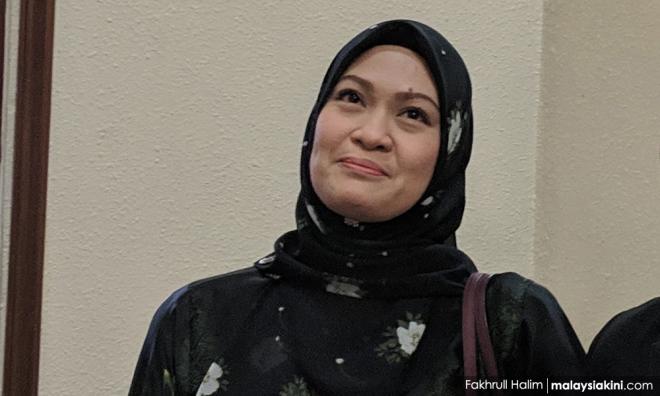 The High Court in Kuala Lumpur was told today that the objective of setting up Yayasan Akalbudi was to accept and manage funds to eradicate poverty under its poverty eradication programme.

According to Companies Commission of Malaysia (SSM) executive Pinny Asnan (above), this was based on Yayasan Akalbudi’s Memorandum and Articles of Association signed by Ahmad Zahidi Hamidi on March 7, 1997.

The first prosecution witness also said Yayasan Akalbudi which was formerly known as Yayasan Budi with Zahidi as one of its founders, was set up as a limited company for the purpose of carrying out charity work.

“(According to its licence), among others, the foundation was prohibited by its constitution to make any dividend payments to its members.

“This licence was issued on July 10, 1996, signed by (the late) Abu Hassan Omar, the minister in the Domestic Trade and Consumer Affairs Ministry then,” she said.

Pinny said the condition was stipulated in the foundation’s licence under Section 24 of the Companies Act 1965.

She stated this when reading out the witness statement on the first day of the hearing in the case against the former deputy prime minister who faces 47 criminal charges involving tens of millions of ringgit belonging to Yayasan Akalbudi in the presence of Justice Collin Lawrence Sequerah.

Earlier, the prosecution in its opening statement said among others that it would prove that Zahid (photo) had embezzled RM31 million of Yayasan Akalbudi’s funds and not a sen of the money was used for the benefit of the poor.

The prosecution said the money trail which will be presented in court will show that a large amount had been used, among others, to pay for personal credit card bills, and to purchase insurance policies for motorised vehicles and to pay for the road tax of personal vehicles.

Earlier, during the examination-in-chief by DPP Lee Keng Fatt, the witness confirmed that the original name of Yayasan Akalbudi was Yayasan Budi and the company had applied for a name change to Yayasan Akalbudi on Aug 7, 1997.

Zahid pleaded not guilty to 47 charges, 12 of which are for criminal breach of trust, eight for corruption, 27 for money laundering involving tens of millions of funds belonging to Yayasan Akalbudi.

The hearing conducted in the presence of Justice Sequerah continues tomorrow.