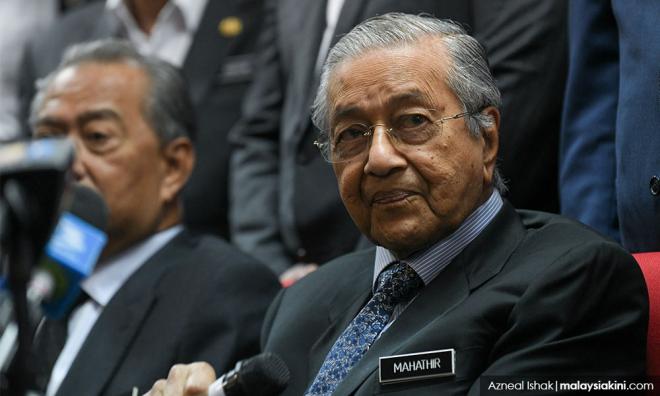 Prime Minister Dr Mahathir Mohamad today dismissed that he had any role in the meeting between Umno MPs and Economic Affairs Minister Mohamed Azmin Ali on Monday night.

"Maybe I'm a dictator, but I didn't dictate this time," he told a press conference in Petaling Jaya today.

He was asked to respond to a report by The Star, citing sources, which said parties linked to Mahathir had instructed Azmin to meet the Umno MPs.

"Mahathir was busy, his parties directed them to meet with Azmin first so that he could gauge where their support stood and whether they were sincere in wanting to support his leadership," the report had quoted the source as saying.

Mahathir said he had not spoken to Azmin yet and did not know why there was a meeting.

Asked if the meeting was appropriate, Mahathir said it was a matter for his coalition ally PKR to address.

"This is a PKR problem. They should research the matter," he said.

Azmin, who was yesterday quizzed on the meeting, was coy about its purpose. After being pressed, he said it was a "normal meeting" but he "couldn't remember" who organised the gathering at his own residence.

Some Harapan grassroots leaders have blamed Mahathir for the coalition's devastating loss and are suggesting that he hands over power to PKR president Anwar Ibrahim.

However, Azmin had come out strongly in support of Mahathir and asked Harapan to rally behind him.

This was amid continued speculation that Azmin was working with former Umno vice-president Hishammuddin Hussein, who is also the Sembrong MP, to recruit MPs with the aim of blocking Anwar from succeeding Mahathir as prime minister.

Hishammuddin was also present during the Monday night meeting. Umno supreme council leader Lokman Noor Adam accused Hishammuddin of marshalling the Umno MPs for Azmin and called it a betrayal.

Hishammuddin has denied any role in it and said he was prepared to face disciplinary action.