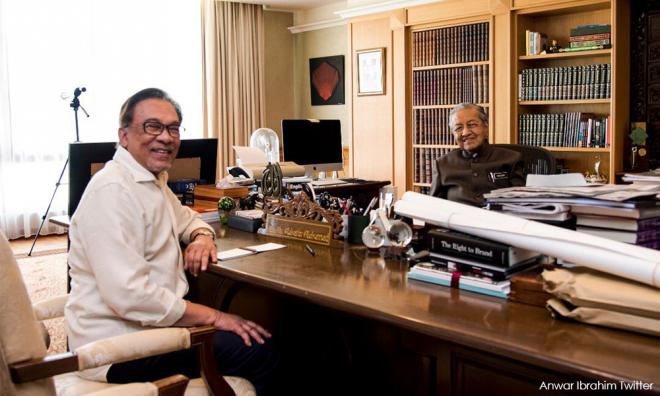 UPDATED | While both Dr Mahathir Mohamad and Anwar Ibrahim remain committed to the prime minister transition pledge, this must be carried out with a “reasonable timeframe”, the latter said.

Anwar, who is prime minister-in-waiting, said he conveyed this message directly to Mahathir himself during a brief meeting between the two former rivals turned allies today.

During the half-an-hour meeting which took place at the Perdana Leadership Foundation in Putrajaya, the PKR chief stated that both the leaders' stand on the power transition, as agreed to by the Pakatan Harapan coalition, remains unchanged.

“In the meeting, I sought the prime minister’s agreement to issue a statement on several issues.

“I informed that the power transition must be carried out in a peaceful and orderly manner, in a reasonable timeframe and obtain mutual understanding,” Anwar said in a series of tweets after the meeting.

“We also do not agree in the case of any effort to stray from the agreement or the use of my and the prime minister’s name in any scheme,” he added.

The Port Dickson MP, who was finance minister during Mahathir’s first tenure as premier, also said both parties agreed to focus on the country’s economic growth and preparation for the Asia-Pacific Economic Cooperation (Apec) summit next year.

The issue of the handover of power from Mahathir to Anwar has been a source of speculation throughout the new government’s administration, with Anwar stating he would like to take over sometime next year.

Mahathir, however, has constantly refused to pin down an official timeframe.

The ruling coalition lost the parliamentary seat to BN by over 15,000 votes, the worst election defeat for the coalition since winning GE14.

Following the loss, Anwar moved in to defend Mahathir, saying the latter is taking the defeat seriously and have taken steps to address it.

Meanwhile, elaborating on the meeting, Mahathir later told reporters Anwar did not wish for the transition issue to be made into a big thing.

“He said he understood the problems faced and there was no need for so much pressure with people making all kinds of suggestions, like the date of the transition,” he said after launching the 2019 Kuala Lumpur Summit at the Perdana Leadership Foundation.

On PAS deputy president Tuan Ibrahim Tuan Man's suggestion that Finance Minister Lim Guan Eng be dropped during any future cabinet reshuffle, Mahathir said anyone had the freedom to give an opinion.

“However, I will decide if it will be agreed on by the five coalition party members,” he said.

This came after Mahathir's statement yesterday said he was considering a cabinet reshuffle following the Johor by-election loss.