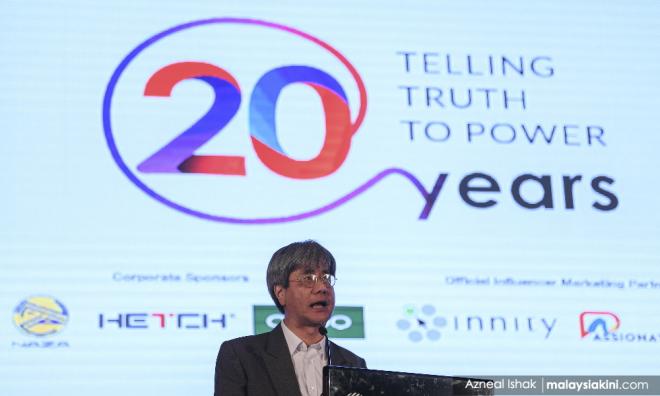 20 years of change – from Mahathir to Mahathir

The following is the text of a speech given at Malaysiakini's 20th anniversary dinner on Nov 23, 2019, which was attended by 1,000 people.

COMMENT | When Malaysiakini was launched 20 years ago, we were using the 56k modem to upload our stories. Those of you who are not boomers would have no clue what I’m talking about.

The 56k modem is a tiny box which made all sorts of funny noises when connecting to the Internet – a combination of hisses and pings. And it is painfully slow. You can forget about uploading photos and videos.

Those days, there was no broadband, no blogs, no Facebook, no Twitter, no WhatsApp, no Wechat, no Instagram, no TikTok, and what have you. Only mobile phones the size of a brick and email.

Over the past two decades, Malaysiakini has covered four prime ministers (three actually, perhaps four soon). We have covered five general elections, countless rallies, and saw the arrest of three of our journalists.

We were declared traitors by one prime minister and sued by another. We faced debilitating cyber-attacks, were kicked out of press conferences time and again, and raided by the police at least five times.

Yes, we have taken our share of the blows. But we are still standing.

In that time, we’ve seen change, too – from Mahathir to Mahathir. I remembered that the haze was a major problem then.

The world, too, has changed. The keyboard generation is being replaced by the touchscreen generation.

Media organisations were once omnipotent. Not anymore. They no longer have complete monopoly on the dissemination of information. Social media has ended that.

Increasingly, the question is not what the media should do to foster a national conversation. Yes, the media should continue to play a role in facilitating that, especially in helping to build consensus in a divided society.

The question we should ask is, what you can do?

We should make it our duty to be better informed on issues that we care about deeply, issues that will have a great impact on us, those around us, and those who come after us. You can start doing that by visiting Malaysiakini.

By not countering them, we allow them to take over the narrative and make it their own. We let them dominate our national conversation.

It is about how we manage conflicts, how to change attitudes, and how to make compromises – it is a job not just for politicians but for everybody.

And for a divided society like Malaysia, it is a long and difficult process. But we must start - now.

This is our fifth-anniversary dinner. We had our first one when Malaysiakini was one year old, another when we were five, then when we were 10, and the last one was when we were 15.

It was decided long ago that no politician will be asked to speak at our anniversary dinner as a mark of our independence.

We have quite a number of politicians, from all political parties, among us tonight. I salute them for turning up. We all know how hard it is to get them to come when they know they don’t get to speak.

And Anwar Ibrahim has finally made it to our anniversary dinner this year. He was unable to do so at previous occasions, partly due to the generous hospitality of the Sungai Buloh prison.

It is also a tradition at our anniversary dinner for me to call everyone in Team Malaysiakini to come to the stage.

I will not do so this year as there are way too many of us. Especially when we have among us tonight those who have at one point or another worked in Malaysiakini over the past 20 years.

I will, however, call everyone who has worked in Malaysiakini, now and in the past, to stand up. For all current and former staff of Malaysiakini, please stand up.

I am super proud of all of them. Thank you.

We may not be perfect. We made mistakes at times. We have fallen short on many occasions. We even disagree among ourselves every now and then.

But we have our heart in the right place. We are tenacious, some are willing to make great sacrifices, and we don’t often take no as an answer. Most of all, we take our responsibility as journalists very seriously.

Also, a big thank you to our readers, our subscribers, and our supporters – in particular, those who have contributed to our building fund (the brick buyers) and our legal defence fund.

A big thank you to our columnists and our commentators. Without all of you, there will be no Malaysiakini.

Those no longer with us

We should also not forget those who are no longer with us. They include our erstwhile contributor MGG Pillai, the father of online journalism. MGG passed away in 2006. Sreejit, his son, is here with us tonight.

Also not forgotten is Tony Thien, aka SC Chan, Malaysiakini Sarawak correspondent for many years. Tony passed away in 2009.

And Claudia Theophilus, a senior journalist in Malaysiakini who later joined Al Jazeera and was killed in Lebanon in 2013.

There was also our columnist in the early years, Harun Rashid. I kept this message which I received from his wife 15 years ago, just before Malaysiakini’s fifth anniversary. She said:

“When my late husband wrote his first letter to Malaysiakini only days after Malaysiakini went online, my son was only a month-old infant. My son is now five years old. So is Malaysiakini.

“I thank you for your friendship and for the opportunity you gave to my late husband to write in Malaysiakini. It meant a lot to him.

“And on behalf of my late husband, my son and I, I wish you and the Malaysiakini team, happy anniversary and a big bravo. May Allah bless us all. Amen.”

Harun Rashid died in 2004. His Worldview column in Malaysiakini was dearly missed by all of us.

Harun, MGG, Tony and Claudia had tried their best - through their journalism - to make this world a better place for everyone.

It’s now our turn to bear the torch. We shall not fail them.

And like them, we hope that we too would do our best to leave the world better than the one we inherited.

STEVEN GAN is co-founder and editor-in-chief of Malaysiakini.