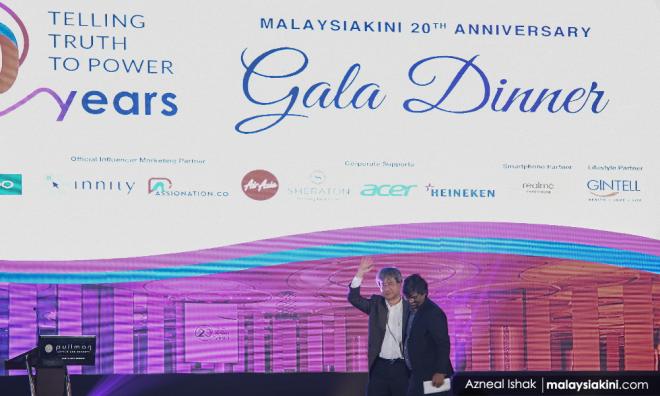 Malaysiakini co-founders Steven Gan and Premesh Chandran are expected to release half of their shares to a Malaysiakini Trust which will be set up in the near future.

Premesh announced this during his speech at the Malaysiakini 20th anniversary gala dinner in Pullman Hotel Kuala Lumpur this evening.

He said the decision comes as part of the transition to pass the baton to new leaders, where he will step down as the chief executive officer in the coming year and to play a role at the board level.

Gan, who is also the editor-in-chief, will "stay on for a while", said Premesh.

"As part of the transition, Steven and I have agreed to donate half of our shares to a Malaysiakini Trust, that is to be set up in the coming months.

"Each of us will retain 15 percent each, for now. We have always held the ownership of Malaysiakini for the greater good, and it's time we formalise it," he said in his speech before 1,000 guests.

Both Premesh and Gan currently control 30 percent of Malaysiakini each, while 11 percent is owned by Malaysiakini staff and 29 percent by international venture capital fund Media Development Investment Fund (MDIF).

Premesh said he hoped to soon convert the Trust into a full-scale Malaysiakini foundation.

He stressed that Malaysiakini will continue to be independent.

"The commercial entities will be owned, at least partially for now, by a non-profit organisation whose interest is not to maximise profit."

According to Premesh, the setting up of the Trust and the foundation serves two purposes.

"Firstly, it is to create a long-term structure - beyond the founders - that will represent values that we believe in, to ensure there is always a voice for the marginalised, an unshakeable institution that will ask the tough questions to power, that the country can turn to for a source of unbiased and independent news, regardless of who runs the country.

"Second, we hope that the Malaysiakini foundation can assist to improve housing, support for better public transport, higher quality of education and healthcare for all - these are critical issues facing the nation," he said.

20 years of change – from Mahathir to Mahathir