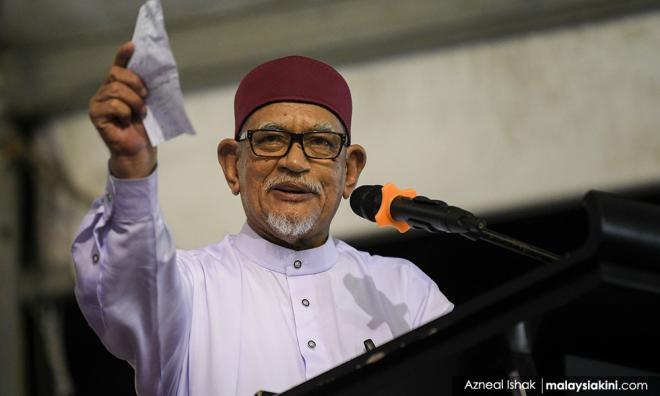 Abdul Hadi Awang is claiming that PAS received offers to form a 'backdoor government' but has rejected it and wishes to take power the honourable way - in the 15th general election through its pact with Umno.

According to a report in The Malaysian Insight, the PAS president told the Muafakat Nasional Selangor ceramah last night about the offer, but declined to mention who had made it.

“There has been a good response (to the cooperation) and this is a good political development.

“We will enter through the front even though the backdoor is open,” he said during his speech.

He added that talk of a backdoor government has gotten the Pakatan Harapan leadership running scared.

“They are scared, and so there’s now confusion in Harapan," he said, claiming that PAS wanted to save the country.

Speculation is rife that former Umno vice-president Hishammuddin Hussein is attempting to form a government without DAP and Amanah.

This escalated following a meeting between at least 22 BN MPs and five from PKR were believed to be at the residence of PKR deputy president Azmin Ali in Putrajaya last Monday.

Hishammuddin has denied the existence of such a plot while the MPs claimed that the meeting was about economic matters and allocations for their constituencies.

politics
abdul hadi awang
Related Reports
Eight more Umno MPs refute Dr M's account of dinner at Azmin's
a year ago
Dr M says Azmin can meet anyone, sheds light on talks with Umno MPs
a year ago
Maybe I'm a dictator but I didn't dictate Azmin and Umno MPs meeting - Dr M
a year ago
Hadi reaffirms support for 'old coconut' Dr M to finish his term, save M'sia
a year ago