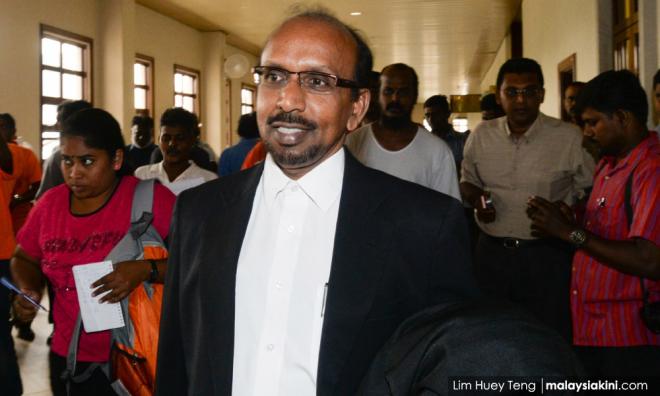 The police have promised a thorough investigation into the death of a 29-year-old man who died in a police lock-up in Penang last week.

They claim that CCTV footages revealed that the detainee had hanged himself to death in the cell.

However, lawyer M Manoharan said the latest incident is similar to the cases reported before, some of which have yet to see a resolution.

He said in a statement today that he is handling two such cases, one involving the Malaysian Maritime Enforcement Agency (MMEA) and another in Seremban prison.

In both cases, the detainees "hanged themselves" to death.

Prior to last Friday's case, Manoharan said the most recent was on January 13 when then 30-year-old M Thianagaran was founded dead by hanging while under the custody of the MMEA in Port Klang.

He was detained on suspicion of drug trafficking.

Manoharan said when Thianagaran died, he left behind 26-year-old wife R Tenaswari, who was at the time, three months pregnant.

Tenaswari had expressed disbelief at his death as Thianagaran's father had met him just three days before and he appeared emotionally stable.

"By letter dated Jan 25, we wrote to the Attorney-General's Chambers for an inquest.

"Until today, no inquest but a mere letter saying that an investigation paper has been opened and the investigation is in progress," said Manoharan, who was former Kota Alam Shah assemblyperson.

Manoharan said there had been no news since then.

"Tenaswari delivered a baby girl on July 9, 2019 and this baby has not seen her father and will never get to see him.

"Tenaswari's New Year's wish is to see justice for her husband's death," he said.

Previously, Manoharan had also mentioned a similar case involving M Mageswaran, who was due to be released from prison in three months, but was found hanged to death and yet to receive an inquest.

He was arrested on Wednesday under the Dangerous Drugs Act 1952 on suspicion of possessing 20g of methamphetamine.

Mohd Fadzli said his brother's death came as a surprise. Police claimed his brother had hanged himself using his T-shirt from the lockup window's metal bars.

"He was brought to the Butterworth court on Thursday for remand and had told me to come to bail him the following Wednesday.

"But at 4am on Friday, I was contacted by the investigating officer telling me that my brother had died from hanging himself," Fadzli had said.

Police say they have CCTV footage to show that Fadzrin had hanged himself.

crime
custodial deaths
police
inquest
Related Reports
No inquest after 33-months, lawyer demands answers for death in custody case
a year ago
Lock-up camera recorded detainee hanging himself, claims cops
a year ago
Another 'death by hanging' case while in custody
a year ago
Another complaint of AGC not holding inquest three years after death
a year ago