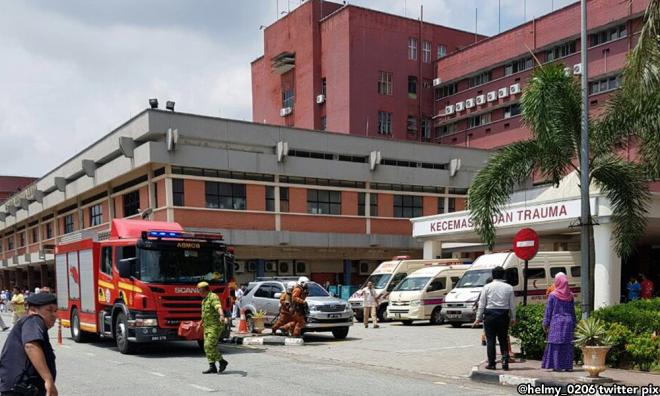 Three years after the fire at Sultanah Aminah Johor Bahru Hospital (HSA) that claimed six lives, family members of a victim has filed a civil lawsuit against the public hospital and government, claiming negligence of patient safety.

According to healthcare news site CodeBlue, the plaintiffs - Chanthiran Palanisamy and Rajaswari Ramalingam named the HSA director, Johor state health director, and the Malaysian government as defendants in their lawsuit filed at the Johor Baru Sessions Court on Oct 24.

Their late daughter, Neeramaladevi Chandran, was 24-years-old when she passed away in the incident on Oct 25, 2016.

"The fire occurred due to negligence and/or contributory negligence and neglect of the defendants in the management, operation, and maintenance of the safety of the facilities and building of Hospital Sultanah Aminah Johor Baru where the deceased was receiving treatment," read the plaintiffs’ statement of claim as quoted by CodeBlue.

Among others, Neeramaladevi’s parents reportedly alleged failure by the defendants to ensure maintenance of electrical wiring and electrical equipment in the building.

They also claimed failure to supervise workers and staff, especially those responsible for maintenance of the safety of the hospital.

Additional charges also included alleged failure to implement an efficient evacuation plan in the event of a disaster; failure to identify problems and failure to prevent a fire from happening at HSA; and failure to evacuate and rescue patients, especially Neeramaladevi, in the fire.

According to CodeBlue, the statement of claims did not specify the exact amount demanded in the lawsuit, but instead asking for compensation on the loss of financial benefits as the 24-year-old was working in Singapore and financially supporting her family at the time of her death.

The lawsuit was filed amid a long-awaited report of an independent inquiry into the fire, submitted by an investigating committee to the Health Ministry and tabled to cabinet last year.

Health Minister Dzulkefly Ahmad announced last week that the cabinet has decided to release the report by the end of this year.