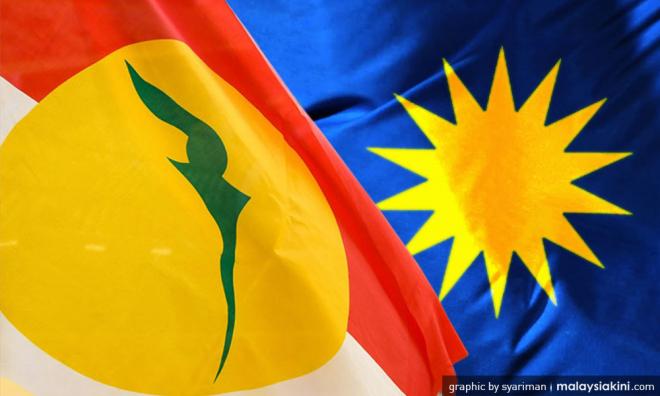 Yoursay: So long race-based parties exist, there will be racism

Khaled Nordin: MCA tried to be more DAP than DAP itself in GE14

Honma: Umno vice-president Khaled Nordin said: "For us in Malaysia, all races must be moderate. The Malays had all this while shown high tolerance and respect for all the other races."

Is this supposed to be a joke? Chinese Malaysians have been reminded time and again by the so-called leaders of the former and the current ruling regimes that we are "pendatang" (foreigners) and should be grateful that we were given citizenships.

And yet, Chinese Malaysians did not protest; they kept quiet and ate humble pie.

At the recent Malay Dignity Congress, Prime Minister and Bersatu chairperson Dr Mahathir Mohamad played up this racial issue again by saying a million unqualified non-Malays were given citizenship.

That was 62 years ago and yet this issue was repeated despite many Chinese have been living in Malaya before independence. How can the Chinese be labelled as "pendatang" when many families have lived here for generations?

MCA lost the support of the Chinese due to Umno’s oppression. MCA did nothing to fight for the rights of the Chinese and this minority community is often blamed for the failures of the majority.

The Third Man: Khaled, all this talk about moderation falls flat when you have the Malay Dignity Congress where one community spewing racist rhetoric by falsely claiming they are the owners of the land and making demands that all government positions must be from one race.

That showed how far removed the participants were from being moderate Malaysians.

Khaled, what is truly required is there must be an open declaration that race must never be an issue in all matters in our country and Malaysians of all races are accepted as equals.

As for Pakatan Harapan’s failure to defend its Tanjung Piai seat, the message is meant for Bersatu’s leader, Mahathir, who has created a huge trust deficit for its coalition partners.

BehtahanBN: This Umno leader’s head must be wrongly screwed on.

He is as good as saying the demands of Umno and PAS for minorities (that is Chinese, Indians and others) to be ineligible to hold leadership positions in the government and only Muslims and Malay can lead this country are deemed to be moderate and just.

Meanwhile, the principles of equal opportunity for all Malaysians as envisioned by DAP and others are deemed to be racist because the emphasis on “ketuanan Melayu” (Malay supremacy) is missing in this narrative.

Soon, it will also be DAP’s fault that Malaysia is lagging behind even Cambodia and Bangladesh.

Mamadias: The Chinese in Malaysia should also be taught that they are living in a multiracial country. The problem with the Chinese is that they think that everyone else must kowtow to them.

Can you imagine that you claim that your forefathers came here 200 or 300 years ago and it is shameful that you can’t speak the national language properly and yet, you want to be treated equally?

What scam are you trying to pull? Shame on you.

Mat MD: As long as racist political parties in Malaysia are allowed to exist, Malaysians belonging to the three major ethnic groups will continue to think along racial lines as they envisage that the respective parties that they support can only look after their own salvation.

This is a fact that cannot be denied as the society is still seen as divided and mutual trust for each other is still at a very low level.

The only way to unite the nation, not to turn racist and bigoted, is to abolish the setting up of political parties run on racial lines.

If this is agreed upon, the problem which has to be overcome is how to find a way to deter political parties from resorting to racism to attract voters.

One suggestion is to introduce a system barring political leaders from questioning the issues of the Malay special position, Islam and the Malay rulers which are enshrined in the Constitution.

The other important national issue is to amalgamate all vernacular schools and national schools into united grand national schools, where each school has to run four streams using Malay, Chinese, Tamil and English as media of instruction under one roof.

With the introduction of this system, the tendencies of indulging in racist politics will slowly be diminished and soon racism will be an occurrence of the past and forgotten.

Multi Racial: Khaled needs to either have his head examined or sack all his advisers.

His analysis is way off reality. No wonder BN lost GE14 as their leaders did not understand what Malaysians want.

Stop corruption and make sure all those who are corrupt must face justice. Always do what is good for the country, and not for you personally or your cronies.

VoteOfOne: It would have been great if Khaled could describe what exactly the DAP approach that Chinese Malaysians, or any Malaysians for that matter, reject.

So far, Khaled is just painting a bogeyman at a time when no one really believes the bogeyman exists.

Anonymous_cdb4fb5d: DAP is a multiracial party with two non-Malays as federal ministers. MCA is already a 100 percent Chinese party and they don’t admit non-Chinese as members.

So, how can MCA try to outdo DAP?

Look into the mirror. Reflect on how Umno, backed by PAS, has radicalised the Malays against the Chinese community, the majority of whom support DAP.

Don't point your forefinger at others when your other four fingers point back at you.