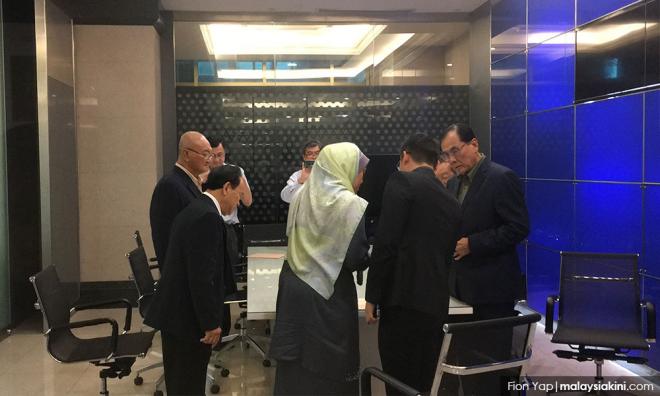 Tardiness due to short notice, says MOE in response to Dong Zong

The Education Ministry claimed it was only given an hour's notice before Chinese education groups Dong Zong and Jiao Zong showed up (above) at its office seeking a meeting yesterday.

The Star cited an unnamed ministry official as saying that at the time they received the notice, most of their top staff were in a post-cabinet meeting.

"They told us at 2 pm that they were coming at 3 pm, the same time our top officers were attending a post-cabinet meeting. It was never our intention to make them wait but with no appointment, what could we do?" the officer said.

He added that they did not send a lower-ranking officer to meet Dong Zong and Jiao Zong as the latter parties would be upset.

Yesterday, the two Chinese education movements had planned to submit a memorandum calling for Chinese school boards to be allowed to decide on the teaching of Jawi lessons in vernacular primary schools.

The groups said they had made an appointment with the private secretary of Education Minister Mazlee Malik and would arrive at the ministry at 3 pm today. They also hoped to meet the minister as well.

However, the ministry’s representative did not show up until around 3:50 pm. The Dong Zong and Jiao Zong leaders then ran out of patience and wanted to leave the memorandum at the counter since they felt the ministry had no time and respect for their concerns.

The media were notified of the meeting on Thursday, but it was unclear when the groups had contacted the ministry to set an appointment.

In August, the government drew flak for announcing the introduction of khat (Jawi calligraphy) lessons for Year 4 vernacular school pupils next year.

Later, the government decided to reduce the Jawi lessons in the Bahasa Malaysia textbook from six pages to three pages and announced that it would only be implemented with the agreement of the parent-teacher associations (PTA) and other parents.

However, the educationist groups were not happy that the school boards were not listed as decision-makers as well in the implementation of the Jawi lessons. In Sabah and Sarawak, some of the schools do not have PTAs.

They had expressed their opinions to Education Deputy Minister Teo Nie Ching during a dialogue held in August.